Before Isha, Rasika was seen as Shanaya in the popular Zee Marathi show. Read for more details! 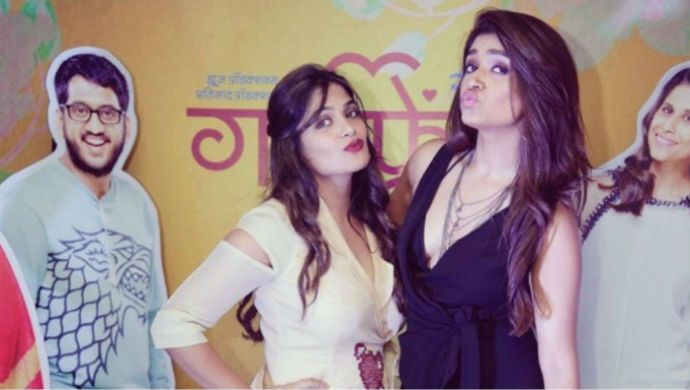 Isha Keskar has made a lasting impression with her feisty character as Shanaya in Zee Marathi’s hit show Mazhya Navryachi Bayko. The actress plays the lead Gurunath (Abhijeet Khandekar’s) second wife in the show. But before Isha made the character popular, it was actress Rasika Sunil who was playing the part. She had to opt out of the show to complete her studies in the US. But the beauty is back in India and recently met Isha. She even posted a picture of their meeting on her Instagram account!

Both the Shanayas bumped into each other at the trailer launch of their film. That’s right, the two actresses will be seen in a film together and we can’t keep calm! Check out this picture.

Ho ho finally bhetlya donhi shanaya!!!! I am super proud of you my girl! You did take care of my baby shanaya 😘 @isha_keskar

Rasika points out that she is proud of Isha for playing Shanaya like a pro. We agree! We wonder if the actresses shared some acting tips on the character too. We can’t wait to see what magic both our Shanayas will spill in their upcoming film. What do you have to say about this picture?

Tell us in the comments section below and stay tuned for more updates! Catch all the episodes of Mazhya Navryachi Bayko, streaming for free on ZEE5.

Have An Irritating Sibling? You Will Relate To These Things From Chi Va Chi Sau Ka