What Does Sai Tamhankar’s Raakshas Have In Common With Harry Potter? Find Out!

The film has been directed by Dnyanesh Zoting and also features Sharad Kelkar and Rujuta Deshpande. Check out more details inside! 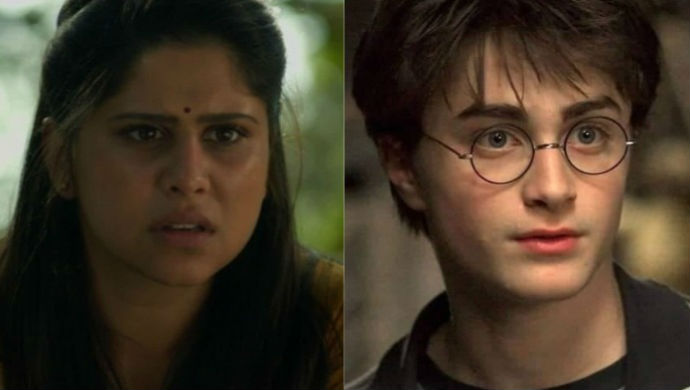 Dnyanesh Zoting’s Raakshas starring Sai Tamhankar , Sharad Kelkar and Rujuta Deshpande makes its mark as the first fantasy thriller in Marathi cinema. The film tells the story of a documentary filmmaker Avinash (Sharad) who goes missing one day, while shooting a project on a tribal group residing in a forest. His daughter Aru (Rujuta) finds a book which reads the story of how a princess rescues her father from a monster. She relates this tale to her own reality and starts looking for her father. The catch however is that she’s told to solve three riddles and only after doing so can she meet her father again.

We are then taken on a thrilling journey of how Aru and her mother Iravati (Avinash), find Avinash. There’s a scene in the film which particularly reminds us of a sequence from Harry Potter And The Deathly Hallows, Part 1. In Raakshas, when Aru finds the book and starts reading the tale of the princess, there’s a visual explanation to the scene where an animated version takes place. We are given a lowdown of the events through the use of caricatures, instead of live action.

This scene reminds us of the one in Deathly Hallows where Hermoine explains to Harry and Ron, about the tale of the three brothers. This is one of the most gripping scenes of the film where the visual imagery vows the viewers, as is the case in Raakshas.

Watch the film here and tells us if you agree with our opinion in the comments section below! For more entertainment, check out the collection of fun Marathi films on ZEE5 here.