Abhijeet Khandkekar who plays this role showed us the woman who has his heart. 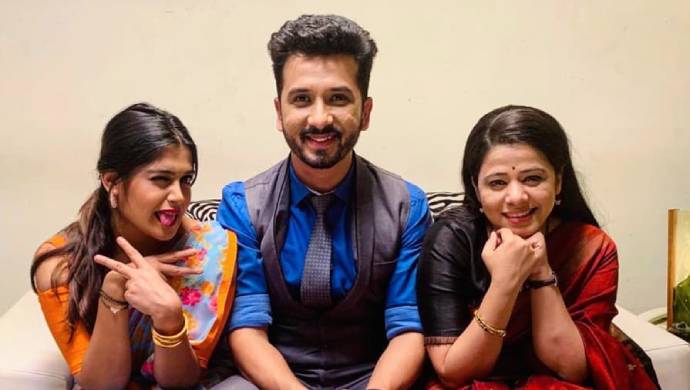 Abhijeet Khandkekar is seen juggling two women in Mazhya Navryachi Bayko. After watching him as Gurunath, fans feel think he is like that in real life as well. But recently, he proved that he only has eyes his wife by proposing to his wife on the stage of Kanala Khada.

Before you proceed, watch him in Kanala Khada below:

On Mazhya Navryachi Bayko, the drama in Gurunath’s daily routine will never end as both his wives are living under the same roof. Shanaya and Radhika played by Isha Keskar and Anita Date are making his life a rollercoaster ride. But, off the screen, Abhijeet is married to actress and Kathak dancer, Sukhada Khandkekar. Recently, Abhijeet made an appearance on the stage of Kanala Khada hosted by Sanjay Mone. The actor was asked by Sanjay to propose again while keeping his eyes closed. At first, Abhijeet seemed awkward but, soon proceeded with his romantic gesture. The host of Kanala Khada quickly called Sukhada while Abhijeet was engrossed in his act. Have a look below:

When Sukhada arrived, Sanjay asked her the question we were all dying to know about. He asked her if she is ever insecure given the ladies present in Abhijeet’s life? Sukhada replied because he has so many women in his friend circle, it helps him become a better husband. Hearing this, we feel Abhijeet and Sukhada are #CoupleGoals, we need to be following!

What are your thoughts on Abhijeet’s acting skills in Mazhya Navryachi Bayko? If you are just as impressed as us, let us know your thoughts in the comments below.

ZEE5 Original Thriller Table No. 5 Will Serve You With The Best Meal You've Had

Tula Pahate Re's Myra To Be Seen In A Marathi Movie?

Can You Guess Which Actor Has Taken Over Batman's Responsibilities?