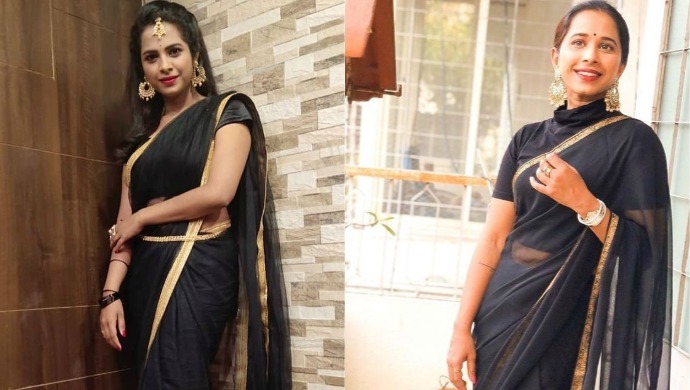 We recently conducted a poll, in which we asked you to pick between Shreya Bugde and Amruta Dhongade. While the former is seen as a comedian in Zee Marathi’s Chala Hawa Yeu Dya, the latter plays Summi in Mrs Mukhyamantri. The two uploaded pictures of themselves, clad in a black and golden bordered sarees. So the question naturally was…who wore it better! The results are in and you have chosen Shreya over Summi! The actress according to you, wore the saree better than Summi.

Shreya won by nearly 75 percent votes in her favour, while Summi got 25 percent votes in her bank. We congratulate Shreya for this big win! The actress is always on top of her style game and never fails to disappoint. Be it western, Indian or ethnic wear, trust Shreya to always slay! But that doesn’t mean Amruta doesn’t deserve credit, right? The actress too likes to experiment with her looks and keeps it simple yet stylish.

Post you wishes for Shreya in the comments section below and stay tuned for more updates here! Catch all the episodes of Chala Hawa Yeu Dya, streaming for free on ZEE5 here.

Pics Which Prove That Looose Control's Amol, Pinak And Jaggu Are Close In Real Life Too