What were Akshaya Deodhar, Hardeek Joshi and Dhanashree Kadgaonkar upto on the sets of the show? Watch promo inside to find out! 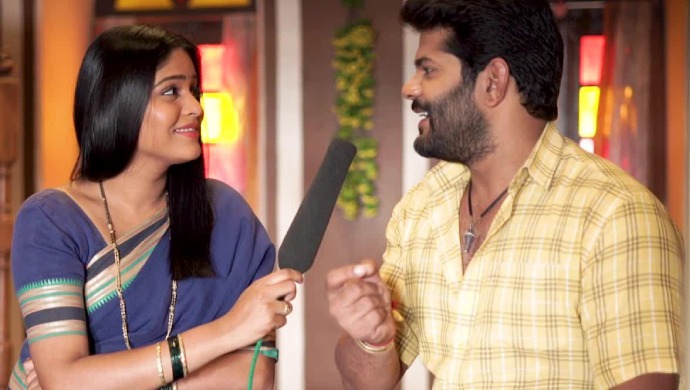 Hardeek Joshi, who played Rana on Zee Marathi’s show Tuzhat Jeev Rangala, is now seen as the character’s lookalike, Raja Rajagonda. His style and mannerisms resemble that of Rajanikanth and his swag has taken the nation by a storm. Everyone is busy imitating Raja and doing his famous dance. The cast of the show recently spent a day with a news channel and let viewers have a sneak peak into what goes on behind-the-scenes. Hardeek uploaded a video of the entire team singing the title track of their show!

In the video, you can see Hardeek, Akshaya Deodhar along with co-star Dhanashree Kadgaonkar, jamming together to the famous song of their show. Even laddoo joins in and makes an appeal to viewers with his cute voice. Watch here.

It would be interesting to learn how the Tuzhat team shoots for the episodes, right? You can now catch all the action from the behind-the-scenes and the sets! Tell us what you think of this video in the comments section below and stay tuned for all the latest updates here.

Catch all the episodes of Tuzhat Jeev Rangala, streaming for free on ZEE5 here.

Faster Fene Is The Indian Sherlock Holmes That We All Need