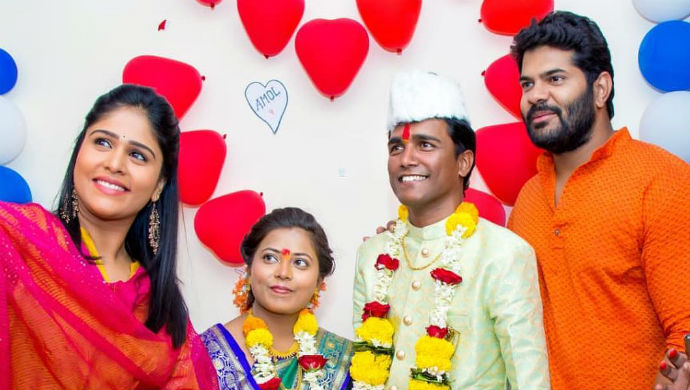 It’s the season of weddings in the Marathi industry! We informed you about Dil Dosti Duniyadaari actors Sakhi Gokhale and Suvrat Joshi getting hitched and now, Tuzhat Jeev Rangala’s Amol Naik too has taken the plunge. The actor who plays the character Barkat on the show, got married in a small ceremony which was attended by his co-stars Akshaya Deodhar and Hardeek Joshi. Our Anjali and Rana took time out to support their friend and were accompanied by Dhanashri Kadgaonkar, who plays the vamp Nandita in the serial.

While Hardeek stuck to his signature style orange kurta and white pyjama, Akshaya chose a gorgeous magenta and yellow suit for the occasion. The duo made it a point to click a tonne of selfies with the newlyweds. Check them out!

We love this one where Akshaya takes a selfie with the entire gang, including good friend Dhanashri.

Looks like the Tuzhat Jeev Rangala team had a lot of fun. We wish Amol’s marriage is as pure and beautiful as Anjali and Rana’s on the show. After all, the couple is goals right? We wish Amol a happy married life. Post your wishes for him in the comments section below and stay tuned for more updates!

Catch all the episodes of Tuzhat Jeev Rangala, exclusively on ZEE5 here.

If You Love Drama And Romance, This Tale Of An Extra- Marital Affair Will Keep You Hooked- Watch Mazhya Navryachi Bayko On ZEE5!

No Honeymoon For Newlyweds Sakhi Gokhale And Suvrat Joshi