Subodh Bhave, Gayatri Datar and Akshaya Deodhar are doing their bit to make a difference in Lok Sabha Elections 2019. Are you? Watch videos inside! 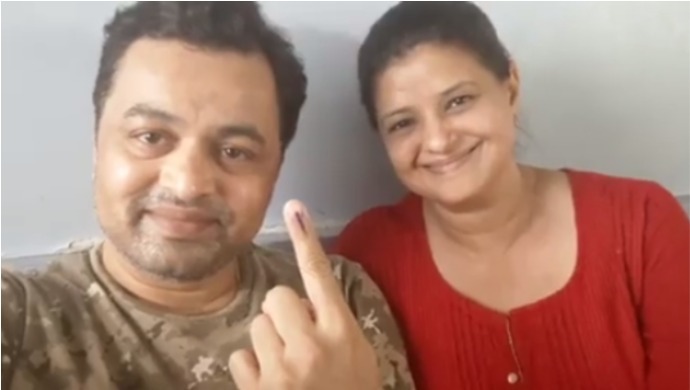 Mumbaikars are looking forward to vote in the Lok Sabha Elections 2019. While some cities in the north have already wrapped up the election process, the Maharashtra phase continues. Elections in Mumbai will take place on April 29 and Mumbaikars are brimming with energy to make their vote count. Same is the case with some Marathi actors who have either already voted or are urging citizens to practice their right. Elections in Pune were held on April 23 and Tula Pahate Re actor Subodh Bhave made it a point to go and vote.

The actor who plays Vikrant on the show, recently put up a video on his Instagram page, telling fans that he got inked. Subodh stressed on the fact that he left his home in Mumbai at 4:30 am along with wife Manjiri, voted and later got back to work, without any excuses. He points out that voting is a right that each and every citizen should exercise. Watch his video here.

Gayatri Datar, who plays his wife Isha on the show, wasn’t far behind and put up a video, urging citizens to vote. The actress in the video is seen saying that she is proud to be an Indian and understands her responsibility of voting.

"Somewhere inside all of us is the power to change the world." – Roald Dahl I encourage everyone who is of age 18 and above to step out tomorrow and vote for the future we look forward to! Let's make sure we hand over our nation into safe hands! ___________________________________________ #IshaNimkar #GayatriDatar #TulaPahateRe #ZeeMarathi #instapune #pune #marathi #MarathiActress #Actress #Smile #Happiness #Vote #loksabha2019 #election #puneelection #instapune

Tuzhat Jeev Rangala’s Akshaya Deodhar, aka Anjali, too put up a video, encouraging citizens to make a difference by voting. In the video, we can see her talking to her son laddoo and explaining to him that only people above the age of 18 can vote. Check it out.

So citizens, are you ready to get inked? Stay tuned for all the updates on elections here!

If you love political films, watch Satyagraha exclusively on ZEE5.

Will Sambhaji Be Able To Protect His Dear Friend Kaviraj? Watch Swarajyarakshak Sambhaji On ZEE5!

From Sai Tamhankar To Siddharth Chandekar, Check Out Our Version Of Avengers: Endgame