Tula Pahate Re 10 July 2019 Written Update: Isha Forgives Vikrant And Goes Back To Him

Is Isha faking it or has she really accepted Vikrant? Find out! 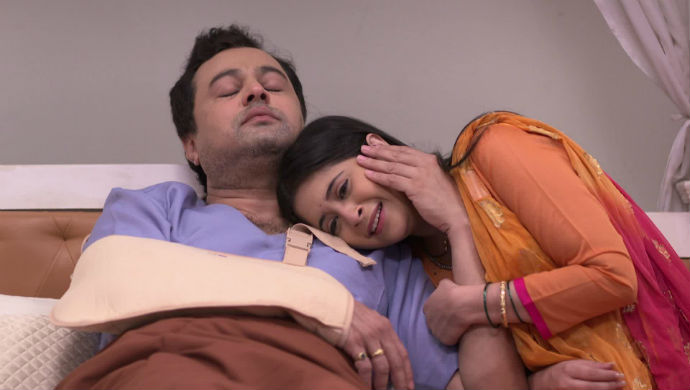 In the last episode of Tula Pahate Re, we saw Jalinder striking a deal with Jhende and agreeing to tell Vikrant the truth about Isha. He however does this, only so that he can make Vikrant reach Isha. Meanwhile, Jaydeep and Isha discover that Jalinder has gone to meet Jhende and the latter gets worried. Jalinder finally comes face to face with Vikrant and reminds him of the vile crimes that he has committed. The episode ends with Vikrant not feeling an ounce of guilt but instead taking pride in whatever he has done to reach his goal.

In tonight’s episode, we saw Jhende asking Jalinder to spill the truth about Isha. But instead, Jalinder shows him a pill and says that it’s poison. He adds that Vikrant’s truth will soon be out in the open. He quickly takes the pill and starts feeling dizzy. Jalinder passes away but not before saying that Isha’s side of the story is true. Jhende is in a fix as to how he would convince Vikrant that he isn’t lying and that Isha has been playing him. He looks up and is shocked to see Vikrant pointing a gun at him.

Meanwhile Isha and her parents are worried about Jalinder as they can’t get through to him. Isha prays for his well being and back at the Saranjame house, Aaisaheb and the others are worried about Vikrant and Jalinder. They wonder where the latter is and get shocked when they see Vikrant walking in. He says Jalinder won’t be coming back. Jaydeep approaches him and asks him about his well being. He further asks about Jhende and Vikrant says that both Jalinder and Jhende won’t be coming back, without revealing anything else.

Vikrant asks about Isha and says he wishes to meet her. Jaydeep says he will call her. Later, Mr and Mrs Nimkrar visit the Saranjames and ask about Jalinder and Jhende. Aaisaheb tells them that she has no idea about where they are. Isha comes home and sees Vikrant, lying unconscious. She gets sad, reminiscing about their happy time together. She caresses his hair and asks him to wake up. He finally does and Isha asks him why he took the bullet for her. He tells her that she’s his life. She asks him about Jhende and in a flashback scene, we are shown that Vikrant had shot Jhende.

He simply tells her that he’s taken care of it. The episode ends with Vikrant telling Isha that he loves her and vice-versa.

Do you think Vikrant is faking his love for Isha? Is Isha making a big mistake by accepting Vikrant again? Stay tuned for all the updates here!

Catch all the episodes of Tula Pahate Re, streaming for free on ZEE5.

Tula Pahate Re 11 July 2019 Preview: Isha And Vikrant Announce They Are Pregnant