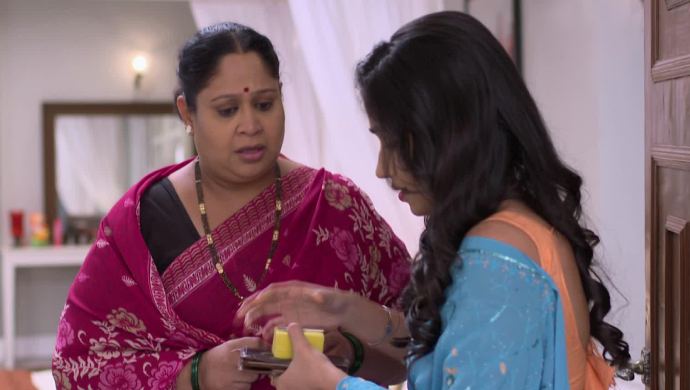 In the latest episode of Tula Pahate Re, Sonya and Jaydeep are called back home as Aaisaheb collapses. But, after they reach, Aaisaheb isn’t ready to tell them the details of the incident as instructed by Vikrant. Sonya gets angry because of this. But, Mrs Nimkar enters and reveals Gaja Patil’s name. Sarjerao Kaka, who is standing in the background, looks at Mrs Nimkar. Meanwhile, Vikrant narrates this incident to Jhende. Vikrant tells Jhende that they have to wipe out Gaja Patil from everyone’s memory. He has explained Aaisaheb, but now he and Jhende have to take care of Sarjerao Kaka and Mr Paranjpe who know the that Vikrant is Gaja Patil.

Mrs Nimkar finds Isha engrossed in deep thought. She tells Isha that Aaisaheb has told everyone to not talk about Gaja Patil. This makes Isha even more curious about this topic. She is determined to find the connection between Gaja Patil and Vikrant. Mrs Nimkar also suspects that Vikrant is no longer the same with Isha as he was before marriage. Meanwhile, Jhende threatens Sarjerao Kaka by involving his family. Along with him, Jhende also calls Mr Paranjpe to warn about the consequences of blurting out Gaja Patil’s name.

The next morning, Isha goes to Aaisaheb to help her out. During their conversation, Aaisaheb calls Isha ‘Rajanandini’ and then apologises. Isha thinks about asking Aaisaheb about Gaja Patil again, but she stops. Aaisaheb tells her that Vikrant loves Isha too much and she has changed his life. On the other hand, Sonya and Mrs Nimkar are trying to forge the keys of Vikrant’s special room. Vikrant comes back from his morning run. He meets Sarjerao Kaka and talks to him about his family. The latter promises Vikrant that he will keep Gaja Patil a secret. Sonya and Mrs Nimakr are still searching as Vikrant is climbing up the staircase.

Will  Vikrant come to know? Let us know your thoughts in the comments below.

Tula Pahate Re 1 April 2019 Preview: Who Will Save Isha From Vikrant's Anger?