In Tula Pahate Re, Vikrant and Jhende have a fight as the latter is accused of kidnapping Isha. 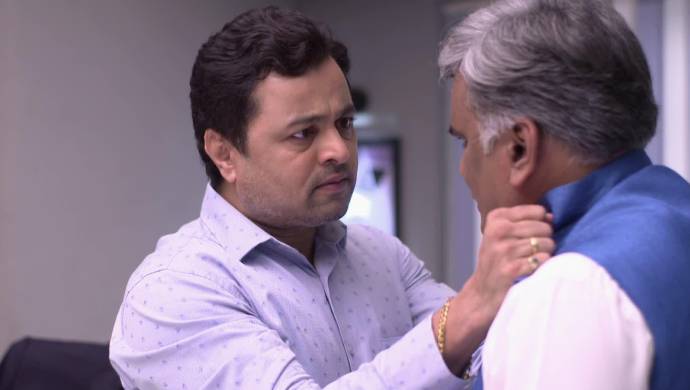 In the recent episode of Tula Pahate Re, Vikrant is thinking about Isha and Jhende’s picture with Jalinder. He is doubting both the parties, even though he and Jhende have been friends for the longest time. Vikrant thinks Jhende has forgotten their friendship, simultaneously he is even suspicious of Isha who he doesn’t think has the ability to backstab him.

As Vikrant is thinking about this, Jhende enters and starts to justify the picture that he had clicked with Jalinder. Vikrant starts screaming at Jhende and doesn’t let the latter give an explaination. Then, Vikrant shows the footage of the CCTV camera to Jhende who starts blaming Isha for this trick, too.

During this conversation, Aaisaheb calls Vikrant and tells him that Isha has gone missing. Immediately, Vikrant doubts Jhende and starts accusing him of kidnapping Isha. Jhende, who is innocent of this, tells Vikrant that Jalinder even snatched his phone. Meanwhile, at home, Mr and Mrs Nimkar are genuinely worried about Isha’s well-being.

Isha realises that Vikrant would be worried for her safety as Jalinder asks his man to keep an eye on him. A hysterical Isha comes in Vikrant’s way on the road and points a finger towards Jalinder for following her. Vikrant rescues her and takes her home safely.

After Isha regains her consciousness, Isha narrates to Vikrant that Jhende asked her to meet him as Jalinder tied her up. She says she barely escaped from their grasp. Hearing this, Vikrant decides to take revenge on Jhende.

Mazhya Navryachi Bayko 26 June 2019 Preview: Radhika To Get Help From Shanaya And Her Mom?