In Tula Pahate Re, Isha, in Rajanandini's form, makes Vikrant talk about his murders in front of everyone. 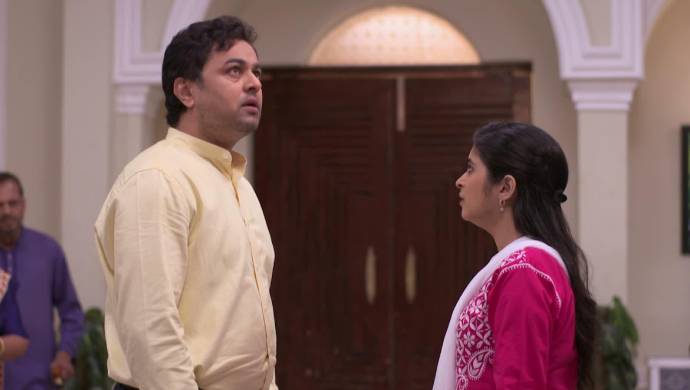 In the recent episode of Tula Pahate Re, Mrs Nimkar confronts Mr Nimkar about his conversation with Vikrant. He discloses their discussion and Mrs Nimkar gets disappointed hearing this. She disapproves her husband’s behaviour but he assures her that she shouldn’t get worried as Vikrant is a good man. Meanwhile, Aaisaheb is worried if Isha will stay true to her word till the very end. She asks Jaydeep about this but the latter tells her that whatever Isha decides she finishes it.

Vikrant is thinking about his conversation with Mr Nimkar. He realises that since Isha is pregnant, he won’t be able to harm her as he wants an heir to their massive Saranjame estate. But, Vikrant vouches that he will brutally punish everyone who has gone against him whether it be Aaisaheb or Sarjerao Kaka.

As he is thinking about this, he sees Rajanandini sitting in front of him and accusing him of inherently being a liar. Then, he keeps seeing her appear everywhere in front of his eyes. This scares him after he realises that there is no one in the room. During this, Sarjerao Kaka tells Vikrant he has been summoned downstairs. As he goes down Isha enters wearing Rajanandini’s clothes. She admits to Vikrant that she is Rajanandini. Isha tells Vikrant about their meeting in Jalinder’s office and their love story further. This starts making Vikrant uncomfortable and he confesses that he killed Rajanandini to save himself.

What do you think will happen in the next episode? Stay tuned for more updates!