In Tula Pahate Re, Isha and Myra both confront Jhende separately as he thinks about kidnapping Sarjerao Kaka. 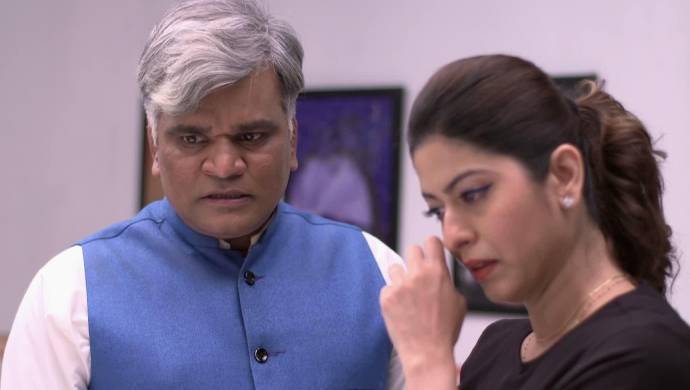 In the recent episode of Tula Pahate Re, Jhende is furious at Myra who has sided Isha and Jaydeep. He asks her about it as she clearly tells him that he won’t be getting any support from her. Myra says she doesn’t care about the consequences while Jhende keeps trying to bring her back to their side. However, Myra is adamant by asking Jhende that Vikrant is responsible to trap her in his scam. Myra tells Jhende to speak to Vikrant and surrender before it’s too late.

Vikrant comes home to a surprise in his bedroom. Isha has decorated his room with balloons and pictures of their times together. Vikrant compliments Isha and Jaydeep’s efforts to expand Rajanandini Sarees. Isha tells him that he has always trusted and motivated her to do better. So, in return, she wants to thank him by taking the responsibility of the entire Saranjame property. Vikrant pretends to be neutral and shows his support towards her decision. Isha professes her love towards him as Vikrant does the same.

At night, as Vikrant is sleeping, Isha is thinking about the things he has done with Rajanandini and her in the past. Amidst this, Jhende calls and Isha answers it. She says the way he has become sleepless, even Vikrant is going to be in the same state soon enough. The next morning, Jhende is thinking about Myra’s words of surrendering. He calls Vikrant and asks him to meet urgently. Jhende decides to catch hold of Sarjerao Kaka for their plan. Meanwhile, Isha is trying to gain Vikrant’s trust.