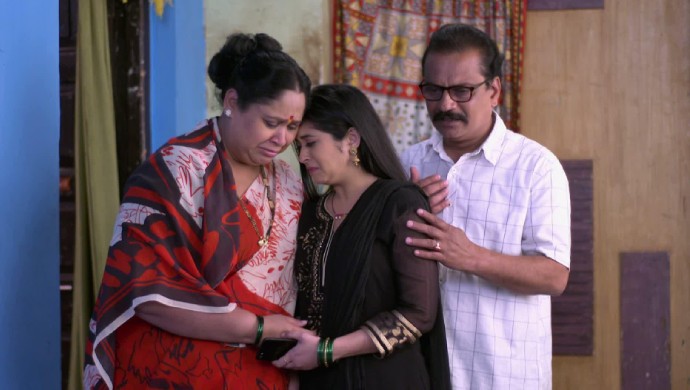 Sonya blindfolds Jaydeep and takes him to meet Isha’s parents in today’s episode of Tula Pahate Re. After reaching, she removes the blindfold as Mr and Mrs Nimkar welcome them happily. Mrs Nimkar calls Isha who is having lunch with Jhende and Myra and asks her to come home soon. Over the call, she questions if Vikrant is with her? Isha replies he may be reaching soon. On hearing Isha, Jhende and Myra are alerted. Then Mrs Nimkar asks her to guess who has come home. Isha hopes it’s Vikrant, but Mrs Nimkar replies Jaydeep and Sonya who have come. She hastily gets up to leave and pays the bill. Meanwhile, Jhende and Myra doubt Isha’s intentions.

Sonya tells Mr and Mrs Nimkar the truth about Vikrant’s absence. Jaydeep tries to stop her, but she tells them how reckless Vikrant’s behaviour is. She says they are used to it by now. On the way home, Isha is worried and thinks about the worst that could happen. She reaches home with a bouquet of red roses and tells her parents that it is given by Vikrant. She makes a story that Vikrant met her below the building and surprised her with these flowers. Isha’s parents are worried and they don’t believe her. Mrs Nimkar says she knows the truth as she stops Isha. She finally tells the truth to her parents and tries to call Vikrant again but his phone is switched off. Isha blames herself for her husband’s immature behaviour but they help her cope with it. Sonya genuinely compliments their house.

While leaving the house, Isha and her mom apply haldi kunku on Sonya’s forehead. During this, Sonya tells her that she should tell all the things to her parents, but Isha replies saying the things related to the house should stay in the house. Sonya looks sorrowful. As they leave, Isha breaks down in front of her parents. On the other hand, Aaisaheb is having a headache since Isha has gone. Jaydeep and Sonya reach home and tell her that they visited Isha’s parents. Jaydeep tells Aasisaheb that Sonya told the Nimkars about Vikrant. She defends herself saying it was their right to know. But, Jaydeep and Aaisaheb don’t agree. The latter still believes that Isha is only Rajanandini.

Will Vikrant finally return? Let us know your thoughts in the comments below.

End Your Day On A High Note With The Music Reality Show, Lockdown Exclusively On ZEE5