Mr and Mrs Nimkar are upset with Isha’s secrets as they feel she is being unjust towards Vikrant. 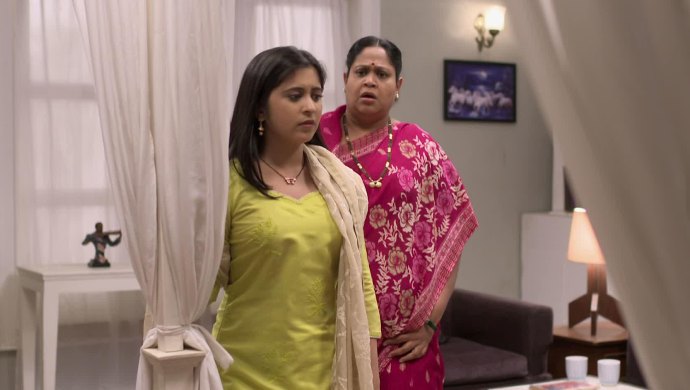 Isha tells the news of her pregnancy to Rupali who is excited to hear it. Isha is in a confused state of mind about her pregnancy as she thinks the father of her child had killed her in the last birth. She feels this in itself is embarrassing as Rupali asks her to forget the past and live in the present. Isha tells she isn’t going to change her ambition and let Vikrant win. Hearing this, Rupali shows her full support.

Watch the latest episode below.
A desperate Jhende is stopped from meeting Vikrant by Jaydeep. He accuses Vikrant and Jhende of all the crimes from the past. Jhende gets furious of Isha’s attempts to make herself Rajanandini. As he begins pointing fingers at Isha, Jaydeep asks him to get out of the house.
Mrs Nimkar asks Sonya to stop confusing them with the details about Isha. Sonya again starts brainwashing Mr and Mrs Nimkar against Isha. She, then, threatens to leave the Saranjame’s house. Meanwhile, Isha and Jhende come face to face have an argument. He tries to seek support from Aaisaheb who looks at him with pure hatred. Jhende again threatened Isha to act wisely.
Isha gets tea for her parents as they make their annoyance evident to her. Mr Nimkar asks Isha if Vikrant got shot by himself or someone else shot him. She is shocked to know that they are aware of the truth as she inquires who told them. They are frustrated with Isha’s connection to Rajanandini. Isha’s parents thinks she has distanced herself from them. Mr Nimkar wonders why Vikrant had come the temple in search of Isha. But, Isha stays silent. They decide to go back as Isha begs them to trust her decisions.
What do you think will happen in the upcoming episode? Let us know your thoughts in the comments below.
Meanwhile, for more entertainment, keep watching your favourite TV shows streaming free on ZEE5.

Tula Pahate Re 2 July 2019 Preview: Isha’s Parents Hurt After Hearing About Her Pregnancy