This Video Of Ratris Khel Chale 2’s Shevanta And Sarita Singing Will Make Your Day!

Which song do they sing? Watch the video inside and find out! 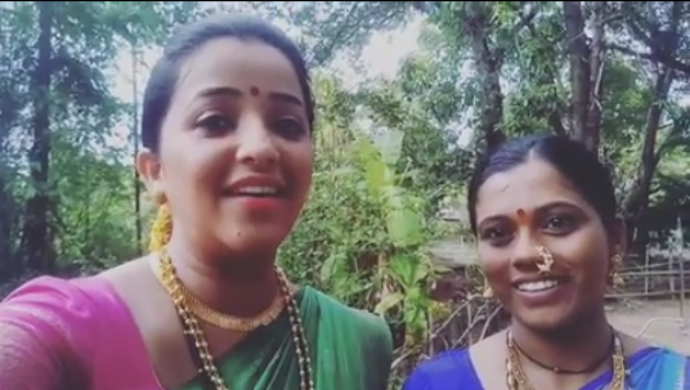 Shooting for Ratris Khel Chale 2 is no walk in the park. The cast and crew of the popular Zee Marathi horror show have to set up base in Konkan and shoot there for nearly 50 days, till the schedule is complete. But the team knows how to have fun and kill time! The show’s main lead Apurva Nemlekar aka Shevanta makes it a point to spend her free time either exploring the locales of Konkan or indulging in entertaining activities with her team mates. The actress had earlier posted a video where she is doing the ‘Vacchi’ dance, based on the character of the same name from the show. Now, she has roped in Prajakta Wadaye aka Sarita for her next video and you can’t miss it!

Apurva recently uploaded a video of the two where they are seen singing a song together. Watch here.

Our beloved Shevanta and Vacchi were shooting for the show and took time out to record this video. It proves that the beauties are not only talented actors but also singers! Watch the video and tell us what you think about their singing skills in the comments section below. Stay tuned for more updates here.

What Are Vikrant And Jhende Planning Against Isha? Watch Tula Pahate Re On ZEE5!