Pant's desperate attempts to get a title in the court are caught. 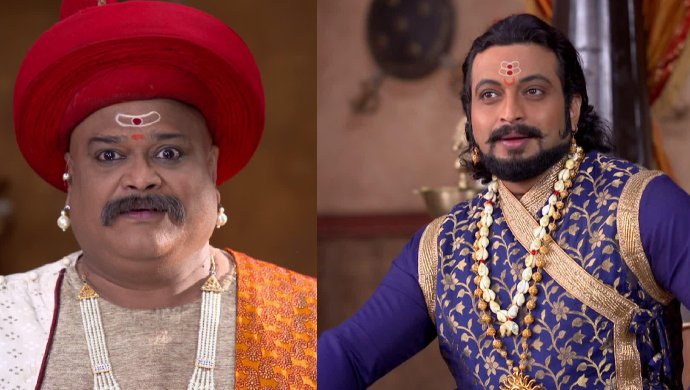 In the recent episode of Swarajyarakshak Sambhaji, we saw Anaji Pant trying to get in touch with Soyrabai. He wants to pressurise Sambhaji to bestow him with a prestigious title that’s why he is playing mind games with Soyrabai. Do you think our Raje will overlook Pant’s faults and give him the position?

Watch the court politics of below:

In Swarajyarakshak Sambhaji, Anaji Pant has openly supported Soyrabai’s son to sit on the throne. He and Soyrabai ganged up against Maharaj after Chhatrapati Shivaji’s death and planned a coup. In the current track of the show, Shambhu Raje has forgiven his stepmother, but here’s what he has to say to Anaji Pant who is demanding a title in his court. Check below!

After Soyrabai, Anaji Pant gets in touch with Shivaji Maharaj’s mentor Samarth Ramdas to fulfill his motto. Sambhaji finds out this letter and humiliates Pant in front of everyone. He says that Pant shouldn’t have involved Samarth in this matter. He, being the king, will decide when and what title should be given. We have seen Sambhaji forgive Pant time and again for his mistakes, but will he be forgiven right now? If Shambhu Raje, the face of Swarajya keeps ignoring such enemy threats, it could make him a weak.

Do you think Anaji Pant will stop his vile attempts against Sambhaji? Let us know your thoughts in the comments below.

Meanwhile, if you have loved watching this historic story, check out the love story of Jodha Akbar streaming free on ZEE5.

Watch The Ambitious Jasmeet Fulfill Her Dreams In Namaste London On ZEE5!

Want To Be A Wrestler Like Tuzhat Jeev Rangala's Rana? Here's All You Need To Do

Ratris Khel Chale 2: Who Will Be Anna's Next Target?