What punishment does he give Anaji? Watch promo to find out! 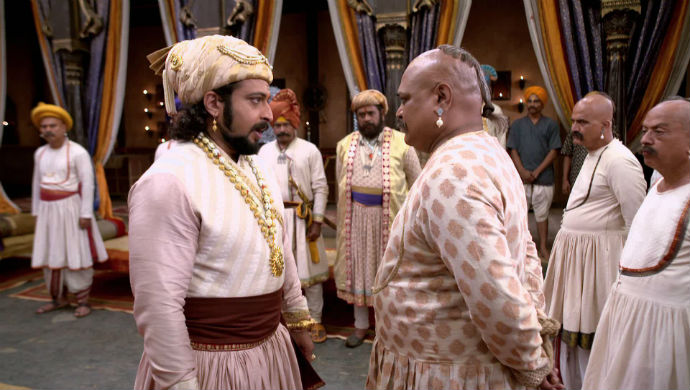 Currently on Zee Marathi’s hit show Swarajyarakshak Sambhaji, fans are witnessing Anaji Pant’s trial. The evil man has finally been caught for his crimes and Sambhaji’s wife Yesubai is trying to prove him guilty in court. In the recent episode, we saw Soyrabai coming under fire for mixing with Anaji to make her own son sit on the throne. She has finally spilled the beans on what her motives had been all along. The time has come for Sambhaji to give his final verdict on Anaji Pant and the latest promo shows that he will finally do so.

In the video, you can see a furious Sambhaji talking about Anaji Pant’s crimes. However he shocks everyone when he says that he forgives all those who were involved in planning his murder. But he talks about Anaji’s attempt to divide the kingdom and give one part to Akbar and adds that for him, this is the biggest crime committed by Anaji. So what is Sambhaji’s final punishment? Watch here.

Sambhaji has ordered that Anaji Pant be killed by an elephant’s paw. What do you think of this verdict? Do you think it’s too cruel a move, considering how humane and righteous Sambhaji is? Or do you think Anaji deserves it?

Tell us in the comments section below and stay tuned for more updates! Catch all the episodes of Swarajyarakshak Sambhaji, streaming for free on ZEE5.

Will Jallinder's Plan On Mixing With Jhende Work? Watch Tula Pahate Re On ZEE5!