In Swarajyarakshak Sambhaji, Kondaji Baba takes surma from Lavangi Bai and she reports this to Siddi who becomes suspicious. 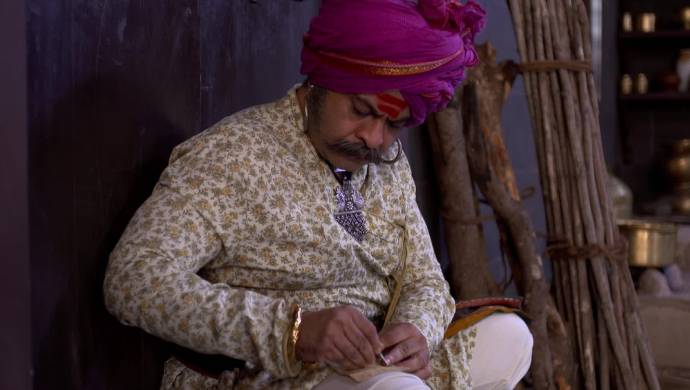 In the recent episode of Swarajyarakshak Sambhaji, Lavangi Bai follows Kondaji Baba to his room. He isn’t very pleased with the gesture and wants to get rid of her. She puts a mattress for Kondaji Baba to sleep next to him. But, Kondaji Baba asks her to stay away from him. As Kondaji Baba sleeps, Lavangi Bai keeps staring at him making him turn his face to the other side and draw the curtain.

Aurangzeb is worried about the silence from Siddi’s side. He asks his Vazir if Siddi’s loyalties have turned away from them. But, Vazir assures him that Siddi is loyal to Shahenshah. Meanwhile, Siddi decides to kidnap 100 to 200 women from Swarajya as Shambhu Raje respects them a lot. Abdullah suggests that they take Kondaji Baba on this mission but Siddi orders that he can join them only when they change his religion. Siddi wants to turn him to ‘Konda Khan’. In Kondaji Baba’s room, Lavangi Bai tries to massage his legs but he gets irritated and pushes her away.

Yesubai is worried about Sambhaji who is missing in the morning. She speaks to Sakvarbai about his changed behaviour. She tells since the time Kondaji Baba left Raigad, Raje seems different. She knows that he is lying and hiding something from her. Sakvarbai advises her to confront Raje about this. Meanwhile, Lavangi Bai confesses that all the men looked at her with lustful gaze, but Kondaji Baba isn’t like that. He says it’s because of Shivaji Maharaj’s teachings ingrained in him.

Kondaji Baba takes a surma from Lavangi Bai and throws her out of his room. She reports this to Siddi who suspects Kondaji Baba.

Agga Bai Sasubai 10 August 2019 Preview: Abhijeet To Include Asawari's Dish In His Book!