In Swarajyarakshak Sambhaji, Soyrabai feels guilty that she signed away half of Swarajya to Akbar. Meanwhile, Anaji Pant asks her to remain quiet. 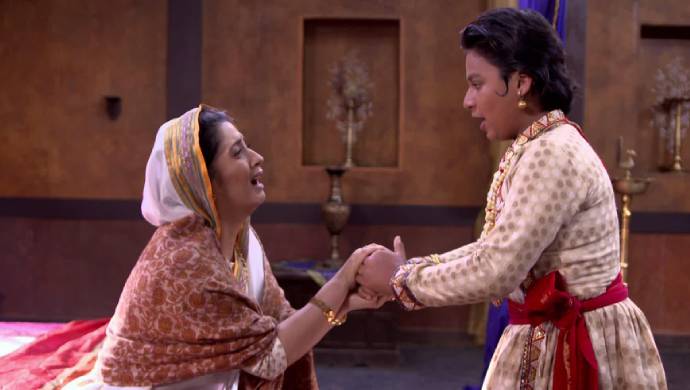 In the recent episode of Swarajyarakshak Sambhaji, Kaviraj sees Soyrabai returning from Anaji Pant’s place. He informs this to Balaji Pant as they both suspect her. Anaji Pant returns from the meeting with Akbar and goes to see Soyrabai. She is worried about Sambhaji finding out and starts rethinking her decision to stamp on the letter. Soyrabai asks Pant to return the letter back to her, but he doesn’t have it either. He assures her that Sambhaji won’t come to know. Then, he asks what if Raje isn’t alive to question their activities?

Following this, Anaji Pant starts luring her again to win the throne back for her son. He, then, apologises to her saying the deed is already done under her blessing and now it can’t be undone. Anaji Pant tells Soyrabai that Sambhaji will be overthrown and Akbar will come into power along with Raja Ram Raje. Then, Akbar will get half of Swarajya and Bal Raje will rule over the kingdom. Hearing this, Soyrabai gasps knowing that Shivaji Maharaj would have never approved of giving away half of Swarajya to anyone.

Anaji Pant justifies telling her if they keep following Sambhaji then one day the control of the kingdom will land under Aurangzeb’s fingers, so he doing this for the betterment of everyone. Soyrabai says her own son will never look her in the eye ever again. Anaji Pant says he doesn’t need her anymore as Akbar will barge in any moment and she should stay quiet for the good of her son. Meanwhile, Yesubai’s trip is successful as their subjects are pleased.

Soyrabai is still disturbed and unsettled after her conversation with Anaji Pant. She is questioning her own vendetta and tries to justify her actions in her head. Soyrabai thinks about her son’s future while realising the true intention of Anaji Pant. She doesn’t want to give away the kingdom built by Shivaji Maharaj and Jijamata to Akbar. As Bal Raje enters, she hallucinates that it is Sambhaji come to ask her for a justification.

Tula Pahate Re 8 May 2019 Preview: Dadasaheb To Confront Vikrant For His Fraud?

Swarajyarakshak Sambhaji 8 May 2019 Preview: Soyrabai Gets In Touch With Sambhaji