In Swarajyarakshak Sambhaji, Kondaji Baba has decided to do bomb blast at Janjira. He sends this date to Sambhaji. 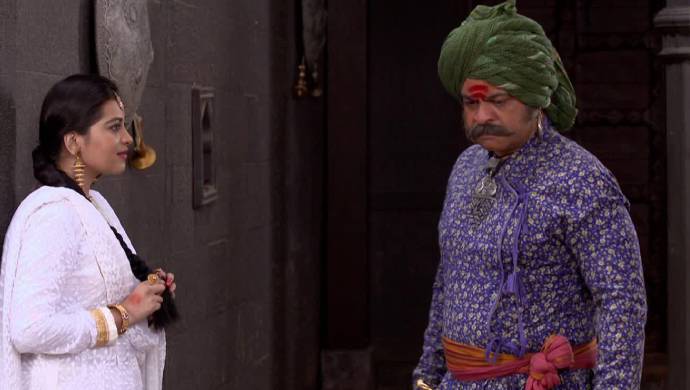 In the recent episode of Swarajyarakshak Sambhaji, Kondaji Baba has impressed Siddi who is complimenting him. He asks Siddi if he can send a gift to humiliate Sambhaji. Siddi readily agrees to his request. Lavangi Bai inquires from Kondaji Baba the gift he is going to send Raje. But, Kondaji Baba doesn’t reveal anything and gets angry at Lavangi Bai.

Yesubai gets to know Sambhaji has lied to her about his visit to Pratapgad. She is furious for being kept in the dark but Raje doesn’t reveal anything. Everyone at Raigad is discussing Kondaji Baba’s betrayal. They can’t believe an honourable man like him would do such a thing. Meanwhile, Kondaji Baba is praying for Sambhaji’s well-being but Lavangi Bai hears it. She asks him what he asked from God, but Kondaji Baba doesn’t answer.

Sambhaji gets the gift that is sent by Kondaji Baba. It is a miniature model of a mosque. Everyone is furious at Sambhaji’s court and they want him to retaliate just as fiercely. One of Raje’s ministers suggests that Kondaji Baba has changed his religion and this catches Raje’s attention. When left alone, Sambhaji and Bahirji Naik understand that Kondaji Baba has sent a secret message through his gift.

Agga Bai Sasubai 8 August 2019 Preview: Asawari To Get A Special Gift From Abhijeet