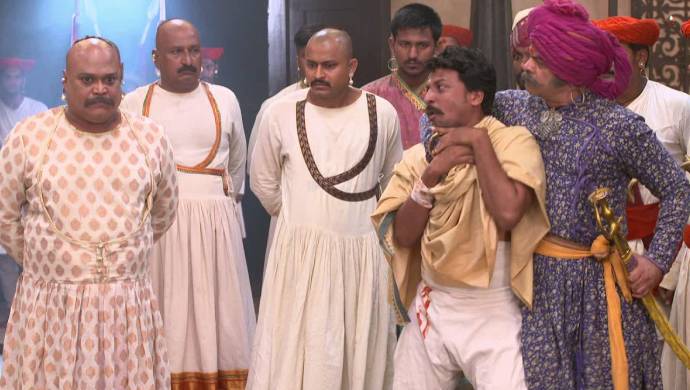 In the recent episode of Swarajyarakshak Sambhaji, Yesubai summons Anaji Pant’s wife, Kaveribai to testify against him. Since she has seen all the meetings between Pant and his supporters, her testimony could be important. As Kaveribai comes, Anaji Pant says he hopes that she isn’t being manipulated. On hearing this, Sambhaji intervenes and asks him to show some respect towards his wife.

Kaveribai says Anaji Pant has hated Sambhaji since the time he was a young prince. He has always created a ruckus when it comes to Sambhaji. She says whenever she asked about his grudge against Raje, he used to tell her to shut up. Kaveribai accuses Anaji Pant of ruining their daughter’s life, too. She admits that ever since Shivaji Maharaj passed away, Anaji Pant had made it his aim to kill Sambhaji and make Bal Raje sit on the throne.

Everyone at the court is surprised to hear this accusation made against Anaji Pant. She starts revealing details about the trap Anaji Pant had made in his house. He only showed it to his supporters and made sure to keep it away from his wife. Challenging these allegations, Anaji Pant says his wife has always been behind tarnishing his image. But, he is stopped in between as Kaveribai is asked to show this trap made by Anaji Pant.

After Kaveribai’s testimony, Soyrabai is called by Yesubai. Ranisaheb asks Soyrabai why she had sent the things to Sambhaji while he was at Panhala. These objects were all warning signs which indirectly hinted Raje of impending danger. Yesubai grills Soyrabai regarding this matter, however, Rajmatoshree doesn’t let out the truth. Right after Soyrabai had sent these things to Shambhu Raje, there was an attempt to kill him. Yeusbai thinks these events are connected.

The accused plead Sambhaji to stop the trial as there is no concrete proof against them. As they are pleading, a heavily injured Parshu, Anaji Pant’s servant, comes to testify against him. He wants to seek revenge on Pant who had tried to kill him.