In Swarajyarakshak Sambhaji, Raje has made an elaborate plan to capture Murud Janjira and defeat Siddi! 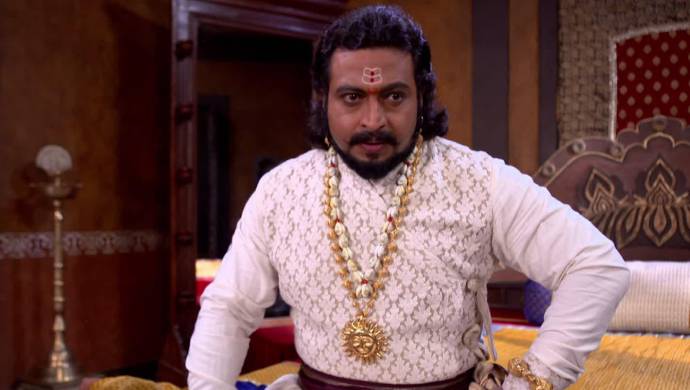 In the recent episode of Swarajyarakshak Sambhaji, Yesubai is angry with Sambhaji for escaping her watch to go meet Kondoji Baba. She is worried about his health and she confesses this to Dhar Atya. Yesubai tells that she is going to confront him the moment he returns. During this conversation, Sambhaji returns to his chambers and Ranisaheb asks him to stop. He doesn’t want to reveal about his meeting with Kondoji Baba so he lies.

Raje says he had gone to the temple to pray for Yesubai’s well-being. She melts after hearing this and softens her tone. Raje compliments Yesubai’s beauty and she feels shy. During this, Dhar Atya comes and teases Yesubai who is blushing.

At Murud Janjira, Abdullah is convincing Siddi to meet Kondaji Baba. He is boasting about Kondaji Baba’s achievements that he has done in the past. Siddi asks Abdullah to test Kondaji before trusting him. Even Siddi says he is going to take three tests, if Kondaji Baba passes those tests, only then he will be trusted.

Sambhaji has already explained the plan to Kondaji Baba before his left. According to the plan, in the first three phases, Siddi will try to see Kondaji Baba’s truth, his methods will be painful and cunning. But, Kondaji Baba has to overcome all of this and become close friends with Siddi. During this time, Kondaji Baba will have to stay in touch with Raje’s mavale. At Janjira, Abdullah is worried if Kondaji Baba will be able to gain Siddi trust.

Yesubai gets medicines for Sambhaji and subtly taunts him. She also keeps asking him about Kondaji Baba’s disappearance but Raje stays discreet.