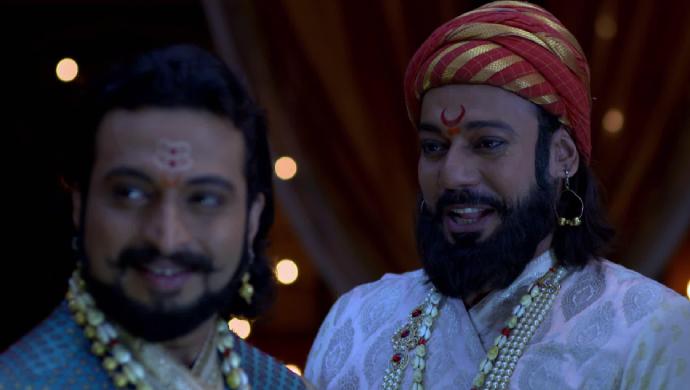 In the recent episode of Swarajyarakshak Sambhaji, Yesubai and all the other ladies are looking for the right muhurta for the Rajyabhishek. Guruji reveals if Sambhaji sits on the throne on Magh Suddha Saptami, he will be a fortunate King. Since the occasion is just around the corner, they have to hurry up the preparations. Yesubai announces that they have completed the preparations for the Rajabhishek.

Durgadas Rathore returns to Akbar to tell him about Sambhaji’s Rajyabhishek. Akbar decides to attend the ocassion but Durgadas reminds him that they don’t have precious things to gift Sambhaji. Akbar says he is the ‘Shahenshah’ while Sambhaji is just ‘Raja’ so Shahenshah doesn’t give Raja anything. Akbar considers his position above Sambhaji’s. This news reaches Aurangzeb and makes him furious. He wants to take revenge from Sambhaji.

Yesubai is discussing the Rajyabhishek’s preparations with Hambirrao and Kaviraj. Meanwhile, in Shivaji Maharaj’s courtroom, Sambhaji hallucinates that his parents Jijabai and Chattrapati Shivaji are there blessing him. His mother tells him to be brave and follow his heart. They ask him to remember all the people and previous leaders who have sacrificed themselves for Swarajya. This makes him very happy. After they are gone, Sambhaji promises that he will always keep his subjects’ well-being before his own. He will protect all the women and mothers in the kingdom. Sambhaji is ready to give his life for Swarajya.

Aurangzeb thinks Sambhaji has already taken Akbar already under his wing. Aurangzeb wants to bring Sambhaji in front of him.

What will be Sambhaji’s next move? Let us know your thoughts in the comments below.

Watch Gandhi My Father, A The True Story Which Shows Mahatma's Relationship With His Son