In Swarajyarakshak Sambhaji, Raje's uncle comes to support his nephew and win the battle against Chikka Devaraya. 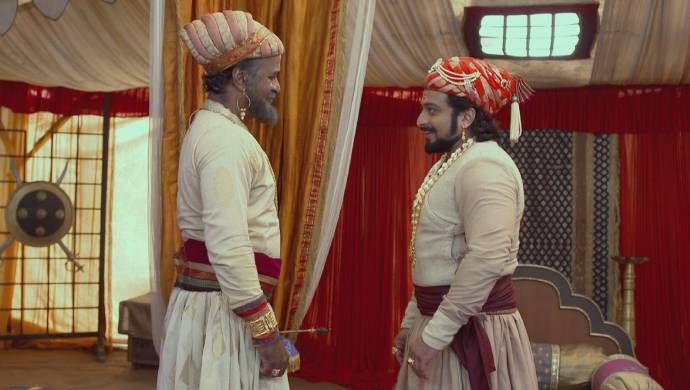 Ekoji Raje Maharaj and Raje hug each other. Sambhaji’s uncle clears all the misunderstandings between them and says that he believes in the teachings of Shivaji Maharaj. Raje assures his uncle that he sees his father in him and gifts Shivaji Maharaj’s sword to Ekoji. Then, the men start preparing for war against Chikka Devaraya. Raje says that since Chikka Devaraya is making different poisonous arrows, they have to be faster than those arrows. Raje plans on attacking Mysore directly but his uncle and Harjirao do not approve of it. Then, they decide to split and bring Chikka Devaraya out of his comfort zone and battle him. During their meeting, they come to know that Chikka Devaraya is fast ascending towards them.

Chikka Devaraya receives the news that Ekoji and Sambhaji have joined forces. He feels overconfident and proclaims that he will beat them. Meanwhile, Aurangzeb is sure that Chikka Devaraya will win. However, his Vazir isn’t so sure as he feels Sambhaji is an expert at outwitting his enemies. On the other hand, Yesubai and Mahoshree are happy that Ekoji Maharaj has kept his old bad feelings aside and is supporting Sambhaji.