In Swarajyarakshak Sambhaji, Sambhaji visits Raigad overnight as he stumbles upon Anaji Pant up to a wrong business. 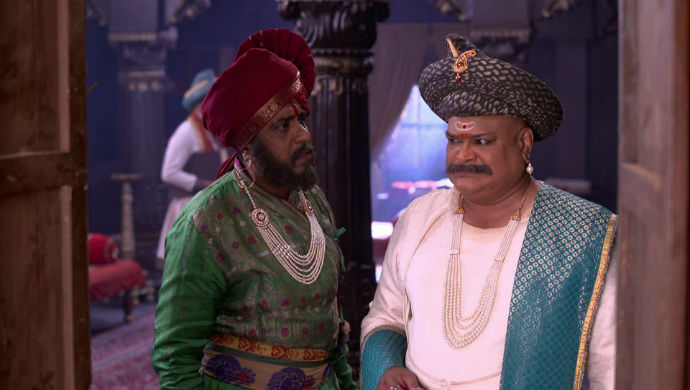 In Swarajyarakshak Sambhaji’s recent episode, Anaji Pant steals a letter (without a stamp) late at night and he is caught by Sambhaji Maharaj. Pant thinks Raje is not at Raigad that’s why he makes a move during his absence. But, Sambhaji tells him that late nights have always been useful for Swarjya as Shivaji Maharaj had escaped the prison and won battles at night. Raje suspects Pant’s motive but doesn’t outrightly say it. Meanwhile, Pant cooks some lies and escapes.

After this meeting, Anaji Pant is deeply offended and humiliated by the words of Sambhaji. He things Sambhaji scrutinises Pant way too much. He wonders how come Sambhaji reached so late in the night without any grand announcement. Meanwhile, Sambhaji has urgently called a meeting with Sardar Dubey, Sardar Ingle, Sardar Arghate and Sardar Kondedeshmukh. The reason he has asked for this meeting as he wants to know how Shah Alem penetrated during his Rajyabhishek. He is worried that his border is becoming weak.

Sambhaji wants to build an army against Aurangzeb. Raje knows that their weak spot is on the mountain where Bhimashankar’s temple is located. He wants his men to strengthen these parts. Sambhaji has his eyes on Delhi by taking Akbar under his wing. Meanwhile, Anaji Pant is disappointed as he couldn’t finish the task because of being interrupted by Sambhaji. As he is indirectly warned by Raje, Pant is angered. Anaji Pant plans to poison Sambhaji by bribing Raje’s loyal men. On the other hand, Sambhaji leaves Raigad overnight, again.

The next day in the morning, Kaveri Bai comes to warn Yesubai about her husband’s intentions. But, she is too scared to speak anything against her husband. So, she remains quite and goes away. While stepping out, she tells Yesubai that she has prayed for Sambhaji’s well-being.