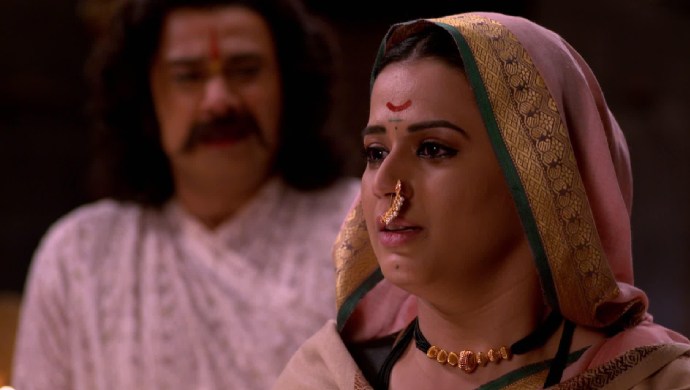 The courtiers break the news of Gaga Bhatt’s refusal to come for Rajyabhishek to Sambhaji in the latest episode of Swarajyarakshak Sambhaji. After hearing this, although Shambhu Raje is shocked, he says the invites have already gone out and now it’s too late to turn back. The subjects need a King and Rajyabhishek isn’t a child’s play which can just be cancelled.

After giving this speech, Sambhaji asks Anaji Pant when he got to know about Gaga Bhatt’s refusal. He replies he only just got to know about it, but he had an idea that the refusal would happen. Sambhaji, then, insinuates if someone from Raigad has spoken ill to Gaga Bhatt about him. Anaji Pant hints they haven’t got a proof to prove it. Then, he asks without Gaga Bhatt how will the Rajyabhishek happen. Sambhaji says it will happen at any cost. Meanwhile, Battashi Bai gives this good news to Yesubai. They both are happy as Soyrabai interrupts their conversation. The ladies are aware that during Rajyabhishek there will be an attack from outsiders and loved ones.

Kaviraj is blaming himself for Gaga Bhatt’s refusal. He is grateful to Sambhaji for becoming friends with him. Anaji Pant’s supporters are happy that he has stopped the Rajyabhishek. He confesses that the way he has been striving so much because he wants to take revenge on Sambhaji for humiliating him. On the other hand, Kaviraj tells Yesubai that he is going back to his hometown as he is homesick. She tries to stop him but he isn’t ready. His behaviour hurts Yesubai deeply. Meanwhile, Sambhaji calls his courtiers urgently for a meeting.

Will Kaviraj stop from going? Let us know your thoughts in the comments below.

Watch The Forbidden Love-Story Of Dhadak Directed By Shashank Khaitan