In Swarajyarakshak Sambhaji, it was Raje's plan to make Kondaji Baba look like a traitor. 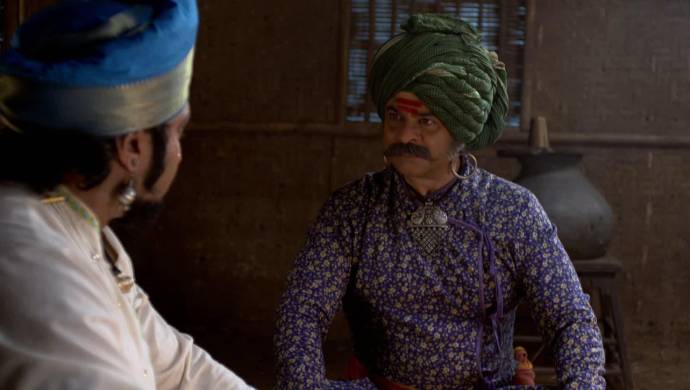 In the recent episode of Swarajyarakshak Sambhaji, Kondaji Baba, who is waiting in the forest alone, is thinking about his humiliation done by Raje in front of the court. Raje accused him of being a traitor of Swarajya. As he is engrossed wondering this, a masked man attacks him. This masked man who is fighting Kondaji Baba is none other than Sambhaji. After their duel is over, Sambhaji hugs Kondaji Baba who is acting according to Raje’s plans. To penetrate Siddi’s forces, Raje has asked Kondaji Baba to ally with Siddi’s men and doublecross Siddi.

Sambhaji apologises to Kondaji Baba for humiliating him in front of the court. Then, he asks Kondaji Baba to be alert in Siddi’s fort. As Janjira is surrounded by water on all the four sides, it is hard for an enemy to enter the fort. Sambhaji explains Kondaji Baba the history of Janjira. Even Shivaji attempted to secure it eight times, all the tries failed due to Siddi’s cunningness and Janjira’s architectural structure.

Sambhaji asks Kondaji Baba to destroy Siddi’s gun powder and ammunition from inside. This will weaken the empire’s defences and Raje can attack the fort from outside. Sambhaji asks Bahirji Naik to take all the precautions to keep Kondaji Baba safe. Meanwhile, at Janjira, Siddi calls his spy Abdullah and presents him with other spy’s head. Abdullah is baffled and asks the meaning of this gesture. Siddi says if he fails even he will be in the same condition. Abdullah is asked to check Kondaji Baba thoroughly.