Who catches him? Read details to find out! 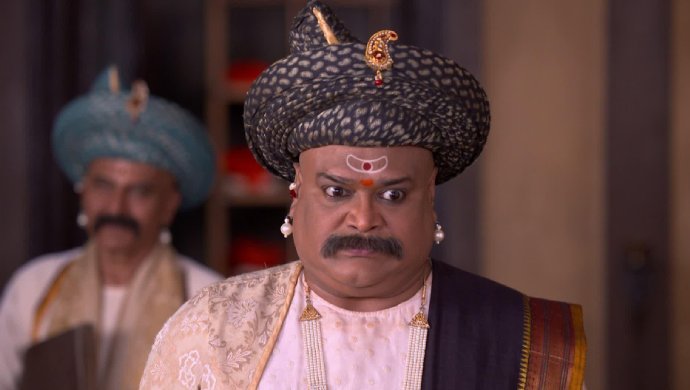 In the last episode of Swarajyarakshak Sambhaji, we saw Kaviraj returning to the palace but not saying a word about his kidnapping. Yesubai is suspicious seeing his battered state and is convinced that he is hiding something. Meanwhile, Kaviraj learns that Akbar wants a bigger army from Sambhaji but Ballaji Pant is against letting the king know about the same. Kaviraj however convinces Ballaji Pant that Sambhaji should be notified. Anaji Pant on the other hand is looking for ways to turn Akbar against Sambhaji. The episode ends with Anaji Pant resigning from his title as Mazumdar and refusing to serve Sambhaji.

In tonight’s episode, we saw Yesubai approaching Soyrabai with Akbar’s letter, that demands a bigger army from Sambhaji. She asks Soyrabai whether the letter should be sent to the king or not. Soyrabai asks Yesubai to take the decision on her own but be cautious as it’s Akbar, a man who has declared war against his own father Aurangzeb. Meanwhile Anaji Pant is busy plotting with Hiroji Pant against Sambhaji. He decides to take Akbar in his wing and turn him against Sambhaji. Anaji Pant says that in order to do that, he should first meet with Akbar once. On the other hand, one of the men in the palace has a discussion with Kaviraj, telling him that he finds something fishy in Hiroji Pant’s behaviour and that something bad is going to happen. Kaviraj assures him that all will be fine.

While this is going on, Hiroji Pant and his fellowman ask Anaji Pant to think twice before deciding to meet with Akbar. Anaji Pant assures them that he has thought things through and poits to an artifact, covered with white cloth. The artifact is a wooden showpiece, carved to show the curved path that Sambhaji walks. Anaji Pant says that now, he will walk the same path to teach Sambhaji a lesson. Just then, Anaji Pant’s wife walks in and wonders what is going on. He quickly covers up the situation and pretends to talk about the well being of Sambhaji, but his wife gets suspicious. A while later, he leaves saying that he has some important work to finish, without telling Hiroji Pant what he’s about to do. Anaji Pant bumps into Kaviraj, who asks him what he is upto. Pant gets defensive and says that it’s none of Kaviraj’s business. Upon being further questioned by him, Anaji Pant says he’s out for darshan. He leaves but Kaviraj gets suspicious.

Later, Anaji Pant sneaks into the palace, looking for something to steal for his motive. Just when he is about to, he is caught by Sambhaji! How will Sambhaji react? Will he punish Anaji Pant? Stay tuned for all the updates here!