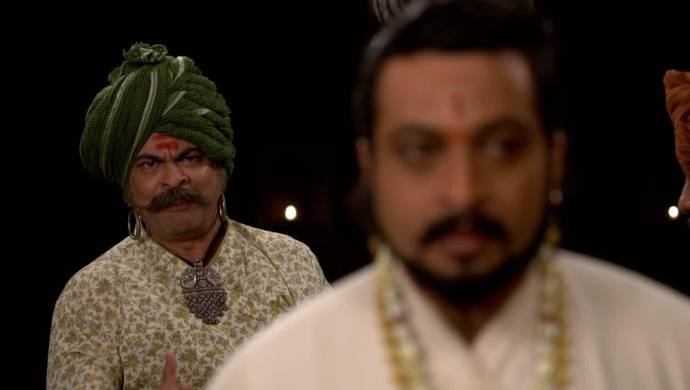 In the recent episode of Swarajyarakshak Sambhaji, Raje wants to defeat Siddi and make Janjira a part of Swarajya. Kondaji Baba is selected for this mission. But, he refuses to go after getting scared of Siddi’s powers. This offends Raje who asks him the reason for his refusal. Kondaji Baba says all the previous missions on Murud Janjira have failed and it seems pointless to lose one’s life over this. Raje accuses Kondaji Baba of taking bribe from Siddi. Sambhaji then secretly asks his spy to keep an eye on him.

At night, Kondaji Baba goes to meet Siddi’s men to take bribe from them. He is followed by Raje’s spy, Bahirji Naik, who sees this meeting. Next day in the morning meeting, Naik tells this news to Shambhu Raje in front of everyone. Raje is shocked and demands Kondaji Baba’s head for this.

Dhar Atya makes delicious dishes for Yesubai. As they both are talking, Raje enters the chambers. Sambhaji is very upset with Kondaji Baba’s betrayal. He reveals this to Yesubai who refuses to believe it. Meanwhile, Kondaji Baba reveals to Siddi’s men that along with him there are more people, close to Raje, who want to join Siddi’s forces. They decide to wait for Balarao who is going to meet Kondaji Baba. On the other hand, Sambhaji is gone missing which worries Yesubai. She is told he isn’t on Raigad.

Watch The Suspenseful Love Story 'Tula Pahate Re' On ZEE5