In Swarajyarakshak Sambhaji, Raje returns to Raigad for the murder investigation which could link back to Anaji Pant. 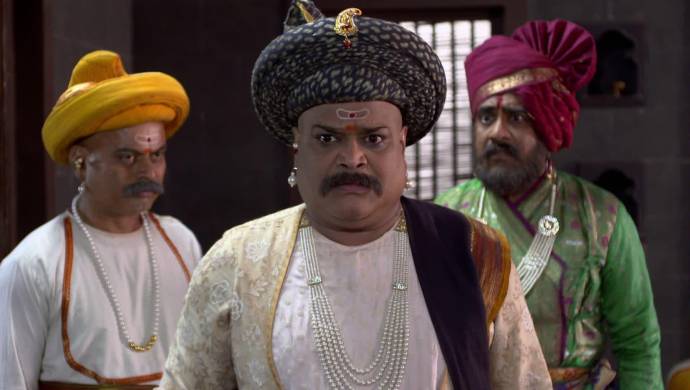 In the recent episode of Swarajyarakshak Sambhaji, as Soyrabai and Anaji Pant are speaking Yesubai enters the room. Ranisaheb suspiciously looks at Anaji Pant as he leaves the room. She then expresses her gratitude towards Soyrabai for sending teeter birds and saving Raje’s life. Yesubai says she truly became his mother after saving her stepson. She thinks Soyrabai got a vision that is why she sent teeter birds. Anaji Pant is sitting with his supporters as they are congratulating him for winning the argument against Hambirrao and Kaviraj. He abuses both these people and hates Sambhaji for supporting them. Anaji Pant wants to approach Akbar.

Sambhaji’s man finds chuna and a letter both of which have come from Raigad. Meanwhile, Yesubai is getting ready to go to Panhala. She is worried about Sambhaji’s safety but Sakvarbai and Kaviraj don’t want to leave the kingdom at Raigad. She is surprised by the hatred that is coming Sambhaji’s way without any reason.

Durgadas and Akbar are discussing the assassination attempts on Sambhaji. Durgadas thinks this could be their window to meet Raje who is refusing to meet them for a while. Akbar suspects Anaji Pant’s hand in these murderous plans. He realises this backstabbing attempt was done on Sambhaji because his subjects are unhappy under his rule. As this could a good chance, Akbar feels he should use this opportunity to take half of Swarajya from Raje’s hands.

Sambhaji’s men go to him with the proofs that they have found. There is a unique scent to the letter which does not come from Raigad. Sambhaji men say Kaviraj has such scents with him. Raje, then, asks to continue the investigation further and keep the proofs safely. Meanwhile, at Raigad, Anaji Pant is going to meet Akbar. He has the same scent on him which the letter carries. As he is about to leave, Sambhaji returns to Raigad. Anaji Pant is worried.

Tula Pahate Re 27 May 2019 Preview: Isha Swears To Get Happiness In The House