In Swarajyarakshak Sambhaji, Khandoji prioritises his duty to Swarajya and Raje. 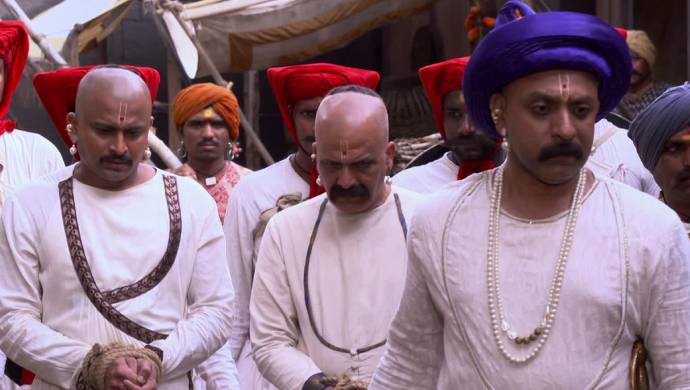 In the recent episode of Swarajyarakshak Sambhaji, Khandoji tearfully confronts his father and Aaoji Pant. His older brother expects him to not arrest them. Khandoji asks them the reason behind involving themselves in this coup. He tells Aaoji that in other situations he would have laid his life for them but this is not a situation where he can protect them. Balaji Pant had once asked Khandoji to protect Sambhaji but now Pant only went against Raje. Khandoji is shamed by accusations as Balaji Pant wants to surrender.

On their way to Raigad, they are spat and humiliated by the public. On the other hand, Anaji Pant is overconfident that he would not be caught by Sambhaji’s men. He wants to go to Murud Janjira which is governed by Siddi Johar. Meanwhile, Heroji Pant tries to get a horse to himself to run away.

Durgadas and Akbar are talking about Sambhaji. Durgadas thinks they have won Raje’s trust as Akbar is frowning that they couldn’t capture Swarajya. He thinks he disappointed his sister Zeenat but Durgadas says that Sambhaji will never leave his side.

Khandoji gets Balaji Pant and Aaoji in front of Raje. He is completely heartbroken as Sambhaji understands this. Anaji Pant’s brother saves his life by confronting the mavale himself. But, he loses and has to be brought to the court.