In Swarajyarakshak Sambhaji, after a long wait, Sambhaji and Akbar finally meet and have an open discussion. 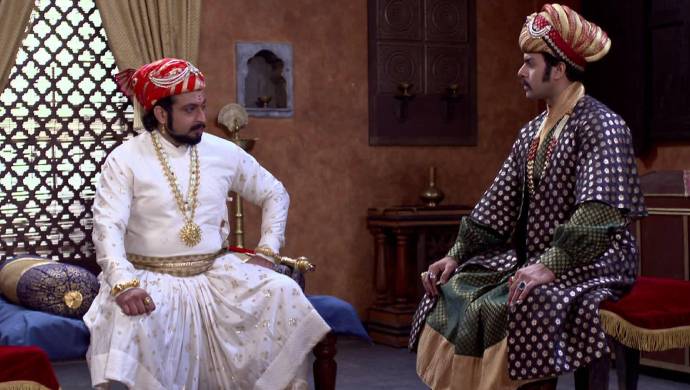 In the recent episode of Swarajyarakshak Sambhaji, Durgadas is making the palace ready to welcome Sambhaji. Akbar intervenes and asks to stop the preparation. He feels Sambhaji won’t come even today but Durgadas assures him that Raje will come to meet him. As promised Sambhaji comes to meet Akbar as they embrace. They both begin by composing poetry for each other.

Aurangzeb is planning to ascend towards Deccan region. He asks his map-maker to draw an accurate map of the region. Then, he announces that the soldiers who do not stay loyal towards the Mughal kingdom will be burned alive in the boiling oil. During this, Zeenat informs Aurangzeb that Akbar has met Sambhaji.  He is irritated with his son who has always gone against him. Aurangzeb confesses that he doesn’t want to see both his enemies come together and stand against him. He promises that if Akbar says a word against him, the consequences would be worst.

Sambhaji and Akbar exchange gifts. After this, Akbar tells he desperately wanted to meet Shambhu Raje for the longest time and now the wish has come true. Sambhaji reciprocates the same feelings. Akbar credits Durgadas for teaching him Swarajya’s history. It is also because of Durgadas that Raje came to know about Anaji Pant’s plan. Akbar knows that the conversation between both of them will reach his malicious father.

Akbar gets emotional while talking about his father who killed 32 relatives to sit on the throne and imprisoned his own sons so that they won’t overthrow him. The Mughal prince confesses he wants to kill the monster thriving in his father. He wants to be a good king, the way Sambhaji is with his subjects. Meanwhile, Raje says he took so many months to meet Akbar because he wanted to see his childhood friend and not Aurangzeb’s heir.