Anaji Pant sends another letter to Gaga Bhatt after realising Khandoji burnt the first one. 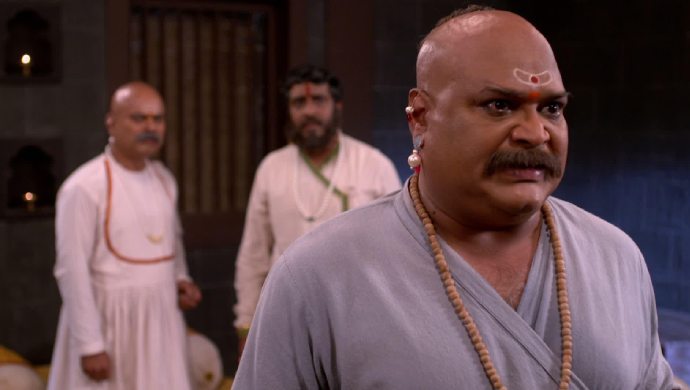 In the recent episode of Swarajyarakshak Sambhaji, Yesubai inquires Sambhaji about Akbar. After they are done discussing that, Sambhaji tells her that she has to take care of Gaga Bhatt’s needs while he is here for the Rajyabhishek. She has to honour his presence and make sure he has a good time during his stay here. But, Yesubau asks him if Gaga Bhatt will agree to come.

Anaji Pant gets to know that Khandoji Ballal has burnt his letter. He has no reaction and starts thinking. Anaji Pant tells his supporters that he has already sent another letter with a messenger. He was expecting Khandoji to do something like that and by now the message might already have reached Gaga Bhatt. Meanwhile, Anaji Pant is discussing with his supporters the trouble his letter is going to cause when it reaches in Gaga Bhatt’s hands. On the other hand, Yesubai and Soyrabai are discussing Rajyabhishek and Gaga Bhatt’s stay at the castle. The ladies of the court are anxious as this moment has come so near. Also, Yesubai has to take care of Gaga Bhatt’s needs during his stay.

Anaji Pant’s letter is read by Gaga Bhatt. Khandoji Ballal who is supposed bring him to Sambhaji for the Rajyabhishek reaches Kashi. He is asked about Shambhu Raje’s administration and control over the kingdom. Like a loyal supporter, Khandoji praises his King’s work. Gaga Bhatt inquires more about satisfaction within the subjects. Khandoji says that there are disagreements sometimes, but they are in goodwill of the kingdom. Then, he asks how happy the courtiers are kept and Khandoji goes silent.

Will Gaga Bhatt come for the Rajyabhishek? Let us know your thoughts in the comments below.

Tula Pahate Re 23 March 2019 Preview: Who Will Save Vikrant From Isha?