In Swarajyarakshak Sambhaji, Soyrabai is made to feel guilty about the shameful things she has done. 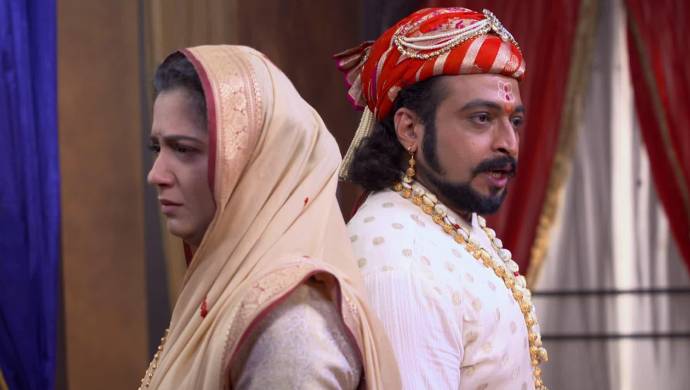 In the recent episode of Swarajyarakshak Sambhaji, Soyrabai is relieved after finding the letter. She wants to destroy the proof as Sambhaji comes and starts shouting at her. Raje feels that she has always hated him. She is accused of humiliating the pure bond between mother and son. He is deeply hurt that a mother could have behaved this way. Rajmatoshree isn’t given a chance to justify herself.

Sambhaji says that she always disliked him right since he was born. As a mother, she should have paid attention towards him but it was Shivaji Maharaj who took that place in his life. Soyrabai is accused of being selfish over the years. She has been blinded by the love for her own son, that she forgot to take care of Sambhaji. Raje reminds her of all this as she is teary-eyed.

Soyrabai was caught in a coup to overthrow Sambhaji even before. Even after all this, Soyrabai says that she is still innocent but Sambhaji doesn’t accept it. She collapses in front of him. Shambhu Raje says that no matter what, he isn’t going to forgive anyone now. Meanwhile, Anaji Pant tells his supporters to hide separately as it would be difficult for the guards to find them. He gives them the motivation that their side will win.

Sambhaji doesn’t find anyone at Raigad. He asks Kaviraj to stop all the people who stood against him. He orders that all the ways out of Swarajya should be barricaded and no one should be allowed to go outside. Meanwhile, Yesubai goes to meet Soyrabai. The latter has decided to escape along with her son. Yesubai, then, goes to Sambhaji to asking him to not forgive them.

Swarajyarakshak Sambhaji 24 June 2019 Preview: Will Khandoji Arrest His Own Father?