In Swarajyarakshak Sambhaji, Kauji reaches Swarajya without any harm. His escape alerts Siddi and he asks to tighten the security. 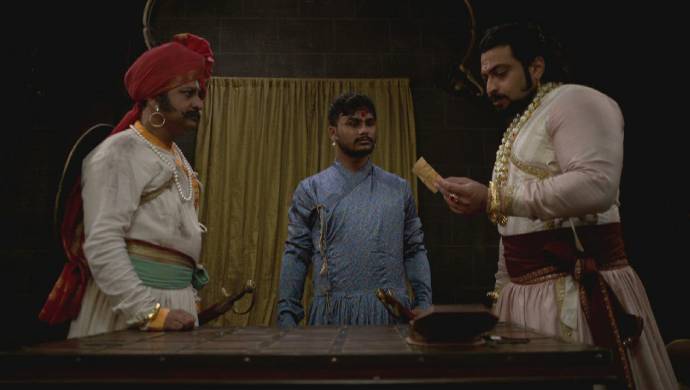 In the recent episode of Swarajyarakshak Sambhaji, Raje’s spy, Kauji, is caught by two of Siddi’s men and both the parties get in a fight. On the other hand, Abdullah complains about Kauji to Siddi who gets furious. He asks Abdullah to run after Kauji and execute him if they get even the smallest proof against him. Siddi has become suspicious of all the new faces that are entering Janjira and he asks his guards to tighten the security around the fort.

Bahirji Naik has come to Kauji’s rescue. They both fight Siddi’s guards and defeat them. Kauji and Bahirji Naik give the secret message to Sambhaji who now knows the location of Amber Darwaza. He tells Raje all the information about Janjira. Meanwhile, Kondaji Baba is discussing ways to get to Amber Darwaza with Raje’s spies. They want to go near the door the same night while fooling Siddi’s men. Kondaji Baba suggests they should create a distraction by wrecking chaos at Janjira.

Lavangi Bai makes special food for Kondaji Baba and he is very impressed with it. While he is having dinner, he is urgently summoned by Siddi who is furious to see his men killed by Kauji. He gets to know that Kauji was an undercover spy at Janjira. As Kondaji Baba enters, Siddi suspects him and inquires about his whereabouts. Along with him, the other Raje’s spies, who are undercover, are brought to Siddi.

Watch The Suspenseful Love Story 'Tula Pahate Re' On ZEE5

Agga Bai Sasubai 22 August 2019 Preview: Abhijeet Flirts With Asawari; How Will She React?