In Swarajyarakshak Sambhaji, Durgadas gives the letter written by Anaji Pant to Akbar. 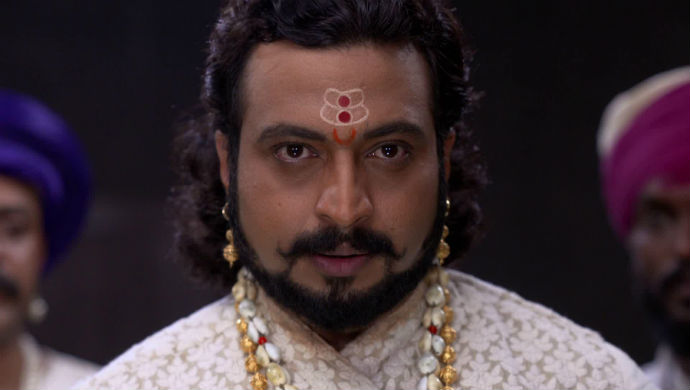 In the recent episode of Swarajyarakshak Sambhaji, Durgadas comes to meet Sambhaji as these both leaders honour each other. After exchanging pleasantries, Durgadas says Sambhaji doesn’t have much time in his hands. Quickly, Durgadas gives a letter that smells of Kasturi to Sambhaji. Raje tells Durgadas that he found a letter earlier with the similar smell of Kasturi. This means, the writer of both these letters is the same.

Sambhaji opens the letter and sees the royal seal of Rajmatoshree on it . This letter is written by Anaji Pant who is pleading Akbar to release them from the imprisonment of Sambhaji and Kaviraj. The letter also promises to give away half of Swarajya to Akbar and make Bal Raje sit on the throne. The letter discusses overthrowing Sambhaji who is described as a tyrant.

Durgadas points at Heroji Pant and Anaji Pant  who are the main people behind this coup. Finally, Sambhaji understands the whole grand plan of Pant. He orders Raiappa to arrest everyone who has been involved in this coup and present them in front of him. Sambhaji is hurt that even Soyrabai is involved in all of this.

Anaji Pant and his supporters are all set to welcome Akbar to Swarajya. He has given orders to everyone and used multiple strategies to smash Sambhaji. Meanwhile, Khandoji is hurt to see his father and his older brother involved in this strategy. On the other hand, Kaveribai informs Yesubai and Kaviraj that Anaji Pant is the mastermind behind this plan.