Swarajyarakshak Sambhaji 2 May 2019 Written Update: Soyrabai And Yesubai To Clash?

In Swarajyarakshak Sambhaji, Anaji Pant's plan to cause friction between Soyrabai and Yesubai becomes successful. 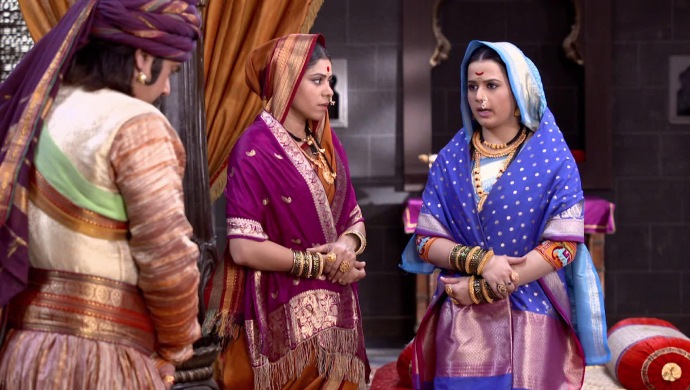 In the recent episode of Swarajyarakshak Sambhaji, Heroji Pant and Anaji Pant are discussing ways of clearing the barriers before attacking Sambhaji. These obstacles are Yesubai, Soyrabai, courtiers and Durgadas which are stopping Anaji Pant’s attempts. He doesn’t want to waste even a second and wipe out all these hurdles before Sambhaji returns. He also wants to send a proposition to Akbar. But, before that, he has to make Yesubai step out of Raigad. In her absence, he wants to get in touch with Soyrabai to make her join his team.

Anaji Pant and Heroji Pant also want to lure Balaji Pant in their team. Then, Anaji Pant goes to check all the letters written to Sambhaji. He steals the letter which will make Yesubai step out of the fort to solve the discrepancies. However, the plan backfires as Yesubai orders Bal Raje to attend to the matter. Meanwhile, Bal Raje while searching for something, he finds his Rajmudra which Soyrabai had once made. After finding this, he gives it to his mother who starts crying remembering the lengths she had gone to make her son sit on the throne. During their conversation, Yesubai’s message reaches Bal Raje as Soyrabai hopes one day to see her son on the throne.

Kaviraj insists Yesubai attend to the matters instead of Bal Raje just to honour the people. Even Matoshree supports Kaviraj as Yesubai is somehow convinced. Meanwhile, Soyrabai is making her son ready to go meet the people. She asks him to connect to the people as this will be helpful in the future. As this conversation is going on, Yesubai enters to tell Soyrabai that her son isn’t going. This shocks her. She tells Soyrabai that seeing the status of the people that Bal Raje was going to meet, it would be fitting for her to go being the regent to the throne.

Will Sambhaji forgive Anaji Pant for his antics? Let us know your thoughts in the comments below.

Tula Pahate Re 3 May 2019 Preview: Vikrant Tries To Impress Rajanandini