In Swarajyarakshak Sambhaji, Anaji Pant's men fail for the second time and leave for Raigad to inform Pant. 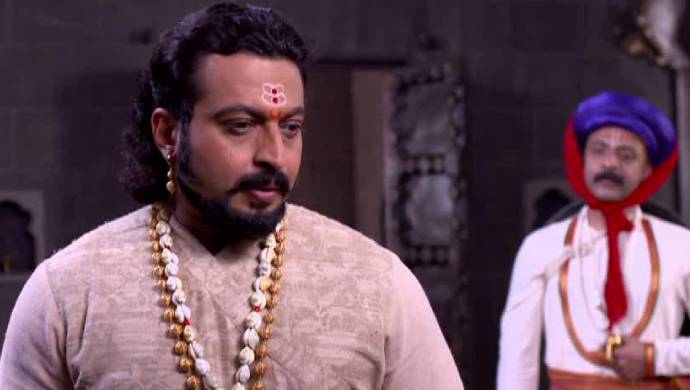 In the latest episode of Swarajyarakshak Sambhaji, Sambhaji’s men inform him about Yesubai’s way of celebrating Mangala Gaur without hurting Sambhaji or Soyrabai’s feelings. Sambhaji decides to strengthen the security at Raigad by sending one of his bodyguards. It is told by Raje that Raiappa is going back to the fort. Meanwhile, Heroji Pant and Anaji Pant are thinking about the next step in their plan. Anaji Pant hints that this time during Mangala Gaur, he will kill Sambhaji.

Soyrabai is talking about the people from outside who are going to attend Mangala Gaur. Yesubai feels awkward and doesn’t know how to tell her that the outsiders aren’t allowed. Ranisaheb tells that this is an order given by the Raje. Soyrabai says if the outsiders don’t come, how they are going to celebrate the ocassion on a large scale. Then, Rajmatoshree walks out as Sakvarbai follows her. Soyrabai feels she never gets things according to her will, that too, with Bal Raje and such incidents have happened multiple times.

Soyrabai is in tears and feels bad for her situation. She remembers how Bal Raje’s times to shine have been shunned by Sambhaji. Sakvarbai explains to Soyrabai that Sambhajia and Yesubai are looking for the welfare of Bal Raje and Jankidevi. Meanwhile, Raiappa and Jotyaji are squabbling within themselves about going to Raigad as Anaji Pant’s men hear this.

At night, Yesubai goes to convince Soyrabai with a plate of food. She asks Rajmatoshree to remember Shivaji’s teachings which the latter has witnessed first hand. After hearing this, Soyrabai gets emotional and compliments Yesubai’s patience. Meanwhile, at Panhala fort, Anaji Pant’s men have adulterated Sambhaji’s food with nutmeg to make him sleepy. As Sambhaji goes to sleep, Anaji Pant’s men enter his apartments.

Yesubai feels guilty of celebrating Mangala Gaur against Sambhaji’s orders. Meanwhile, the men (who are trying to kill Sambhaji) enter from the window and stab the bed but Sambhaji is saved. He then asks his men to look for the culprit. Sambhaji realises whoever has tried attacking has to be someone close to him as that person has penetrated even the walls of his bedroom.

Yesubai is upset that Raiappa has come to Raigad and left Raje’s side. She conveys so to Shambhu Raje’s bodyguard. Meanwhile, Anaji Pant reprimands his men for failing. He, then, gives them a poisoned ring which they should give Sambhaji. As Raje is investigating the matter, he suspects Bapuji and Suryaji.

What do you think will happen in the next episode? Let us know your thoughts in the comments section.

For more entertainment, check out the fun show Liftman streaming free on ZEE5.

Tula Pahate Re 20 May 2019 Preview: Isha's Parents Unwilling To Send Her To Vikrant