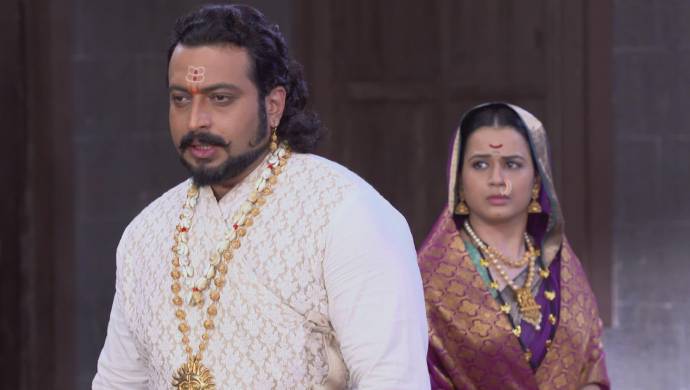 In the recent episode of Swarajyarakshak Sambhaji, everyone is excited about Bhavani Bai’s wedding. The preparations are going on in full swing as the ladies are shopping gold and different types of sarees. During this preparation, Raje enters the room and tries to call Yesubai aside but she doesn’t come. She remembers their conversation from the previous day. Meanwhile, Ganoji Dadasaheb gets ready to visit Raigad. He tries to persuade Kanhoji Rao to accompany him but the latter denies. Ganoji Dadashaeb’s wife enters and narrates how Shivaji had once slashed Shahista Khan’s fingers. Hearing this, Kanhoji Rao, who has secretly allied with the Mughals, gets scared. He walks out of there making Ganoji Dadasaheb’s wife happy. After he leaves, Ganoji Ddasaheb says he is going to take Kanhoji Rao with him no matter what.

Raje yet again tries to speak to Yesubai but she makes some reason and escapes the situation. She is busy preparing for Bhavani’s wedding while making a list of things that need to be done. Raje realises that his wife is ignoring him. He, nevertheless, decides to persuade her as he needs Yesubai to be on the same page as him.

Raje asks Dhar Atya to summon Yesubai and she goes. He apologises to Yesubai for going on the Burhanpur campaign. He tells her how important it is to stop Aurangzeb at this very moment before the danger strikes. Raje says that he wants to be there for his daughter’s wedding but his wishes take a backseat because of his responsibilities. He gives Yesubai the example of Tanaji Malusare who postponed his son’s marriage for a war campaign. After hearing Raje’s pleas, Yesubai says she prepared herself for this future when they got married. She says that she is ready to compromise on her personal life.

Exclusive: I Was Fed Up Of Being Typecast, Says Hutatma Actor Abhay Mahajan