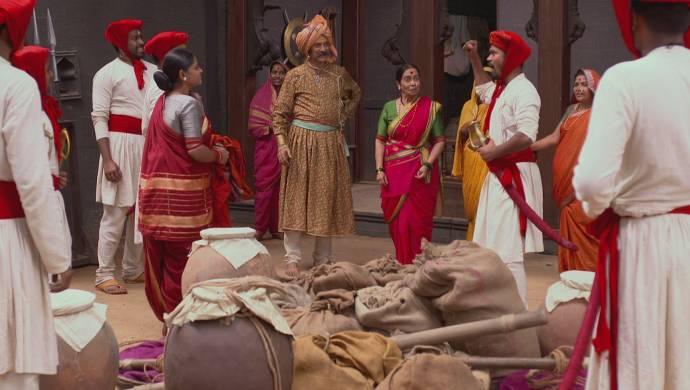 In the recent episode of Swarajyarakshak Sambhaji, Aurangzeb’s man Kalpatrai Bundela reaches Ramshej fort. He tries to strike a deal with the Killedar but it isn’t a success. The Killedar turns down Kalpatrai Bundela’s offer of giving the fort to the Mughals in return for the food. Instead, the Killedar and his family humiliate Kalpatrai Bundela and throw him out of the fort. They make it clear to him that they will starve and die instead of taking help from Aurangzeb.

This news reaches Raje who is proud of his brave men who, even after starving, had the guts to turn down a tempting offer. Raje’s men Nilo Pant and Kaviraj inform Raje that the food supplies that they have sent are slowly reaching Ramshej fort. During this, Yesubai reminds Raje that his sister, Ganoji Dadasaheb’s wife, is going to deliver a baby any moment now.

Ganoji Dadasaheb and his pregnant wife are discussing their future plans. He indirectly tells her that he wants a son. After he leaves, she overhears his conversation with Kanhoji Rao. The latter tries to manipulate Ganoji and says, in case a baby boy is born, they can take their lands back from Raje. Ganoji Dadasaheb’s wife hears this and reprimands her husband for his selfish behaviour. During this, her labour pain starts. She gives birth to a baby boy.

At Ramshej, the food supplies reach the fort and everyone decides to feast nicely. The news reaches Raje who celebrates for Ramshej’s victory and his sister giving birth to a baby.

Hutatma On ZEE5 Will Show You How Maharashtra Came Into Existence. Watch Now!