In Swarajyarakshak Sambhaji, Yesubai is worried about Sambhaji as returns to Panhala fort. 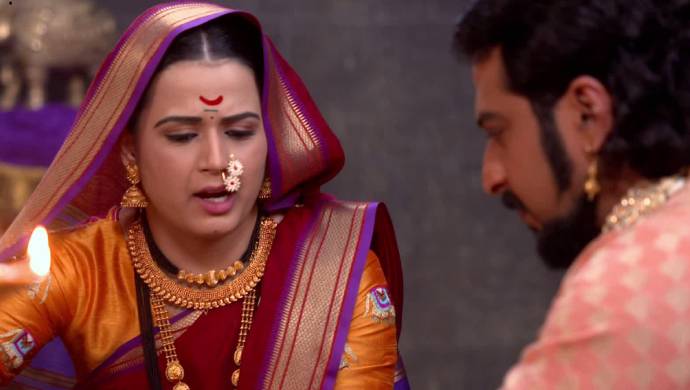 In Swarajyarakshak Sambhaji’s recent episode, Kaviraj asks Khandoji the status of Sambhaji’s ring. At Panhala Fort, Sambhaji’s bodyguards find a ring which fell from the culprit’s hand. He tells them to ask the gold shops around to know exactly the owner of this ring. During this, Yesubai hastily enters and floods Sambhaji with questions about the whole incident. After their heartfelt reunion, Sambhaji confirms this news and tells her the investigation is going on.

Sambhaji’s bodyguards are searching for the culprit by scavenging all the gold shops. Amidst this, the real culprit overhears this news and becomes alert. The culprit goes and tells his partner as they decide to find out the progress of the investigation. They are looking to misled Sambhaji’s army. Meanwhile, Sambhaji and Yesubai spend good time together. She tells him that she had gone to fulfil Jijamata’s navas that she had told for Sambhaji. Raje is humbled by Yesubai’s gesture and feeds her sweets.

The two culprits meet Yesubai inside the fort as they strike a conversation with her. The main culprit tries to hide his hand the ring’s mark that is left on his finger. She decides to cook a whole meal for Sambhaji and asks their help. One of the escapes stating some false reason, while the main culprit has to help Yesubai. The one who has escaped tries to mislead Sambhaji’s bodyguards in the wrong direction. He says he knows the person who has lost his ring. As the bodyguards turn up at that person’s place, he is found dead with no mark of the ring on his fingers. Meanwhile, Sambhaji is impressed by Yesubai’s culinary skills.