In Swarajyarakshak Sambhaji, Akbar is too keen on listening to Anaji Pant's proposal as he goes against Durgadas. 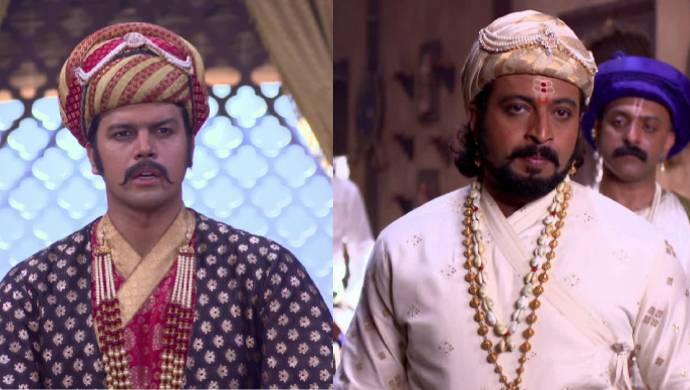 In the recent episode of Swarajyarakshak Sambhaji, Anaji Pant and Heroji Pant have gone to meet Akbar and Durgadas to ask them about his proposition of overthrowing Sambhaji and reinstating Bal Raje on the throne. However, Akbar is still stuck on meeting Sambhu Raje as he asks Pant how much power does he have over Swarajya. Finally, Akbar says he will think about the proposal. As they come out, Anaji Pant says he already knew that Akbar will respond this way so now he has to blackmail all of Sambhaji’s ministers to support him in this agenda.

At Panhala, Sambhaji gets the news that the investigation of his assassination attempt has progressed and they have got a new clue. Sambhaji asks them to nitpick every detail and arrest all the suspects. Then, he orders Khandoji to meet Soyrabai and ask her to decipher the meaning of her letter. He also asks him to check everything is well on Raigad if he feels something is going on then he should inform Raje. Meanwhile, at Raigad, Anaji Pant wants to manipulate Aaoji who is Balaji Pant’s son, only then can Anaji Pant get latter’s support.

Khandoji goes to Soyrabai as she asks him about Sambhaji. He narrates the whole incident to Soyrabai and proceeds on to asking her about the meaning behind the letter. She keeps the true meaning a secret and says she only sent the letter because she cares about Sambhaji. Khandoji doesn’t scrutinise the topic much and walks out of there. Then, she wonders if she has done a mistake by sending Sambhaji the letter.

Soyrabai summons Anaji Pant and questions him about his hand in this murder attempt. Pant plays innocent in front of her saying he is too busy in luring Akbar than plotting against Sambhaji. She gives him benefit of the doubt and releases him. Meanwhile, Durgadas doesn’t trust Anaji Pant and Heroji Pant’s intentions. He mentions this to Akbar who is too tempted to fall in their trap. Akbar says since Sambhu Raje is not meeting him, he wants to grow his power by aligning with Anaji Pant and take over Delhi. However, Durgadas says if Pant is not loyal to Shambhu, would he be loyal to Akbar.

For more entertainment, check out the love story of Phulpakhru streaming free on ZEE5.

Tula Pahate Re 14 May 2019 Preview: Vikrant Loses Despite Killing Dadasaheb

Swarajyarakshak Sambhaji 14 May 2019 Preview: Sambhaji Gets A New Clue?