In tonight's episode, we will see the Portuguese Viceroy enter the Saptakoteshwar temple. What will happen next? 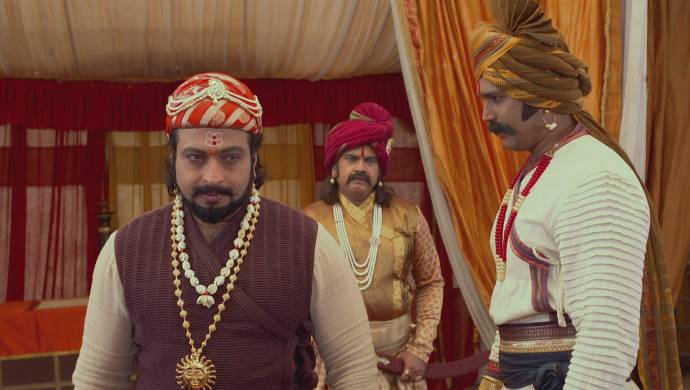 In tonight’s episode of Swarajyarakshak Sambhaji, we see a distressed Rajaram trying to leave the Raigad Fort. He is stopped in his steps by Yesubai who is well aware of what he intends to do. Although he lies to her and tells her that he is going out for a walk, she is able to figure out the truth and tells him not to attempt to leave for Goa, in spite of how much he’s willing to see Sambhaji Raje.

In Goa, Sambhaji has reached a clearing near the Saptakoteshwar temple and is greeted by a group of villagers. The villagers ask him to delay his stay till Gokulashtami, but Sambhaji refuses and tells them that he needs to go back for another task that needs to be accomplished. At this moment, Sambhaji’s minister asks the villagers if anyone in the village is aware of the presence of Raje here in Goa? They outrightly inform Raje that no one is aware of the same. After that is settled, Sambhaji tells them about the time at which he plans to visit the Saptakoteshwar temple.

On the other side, the Portuguese are informed by a spy that Sambhaji has reached Goa. He also tells them that the Maratha King intends to visit the temple at a particular time the next day. Upon hearing this, the Viceroy and his men get ready to arrest Sambhaji and show off their pride by calling themselves the Emperors of the sea.

The next day as the villagers await Sambhaji’s arrival in the temple of Saptakoteshwar, they are in for a great shock! They see the Viceroy walk in and get extremely scared for the well-being of their Raja. But to everyone’s surprise, an old astrologer walks in. What is this astrologer doing in the temple at this moment? What will the Viceroy’s next step be?

Keep up with the royal entertainment. Catch the latest episodes of Swarajyarakshak Sambhaji exclusively on ZEE5.

Swarajyarakshak Sambhaji 13 December Preview: What Will Be Sambhaji’s Next Move?