In Swarajyarakshak Sambhaji, Raje asks Kanhoji Rao if he reached out Aurangzeb. 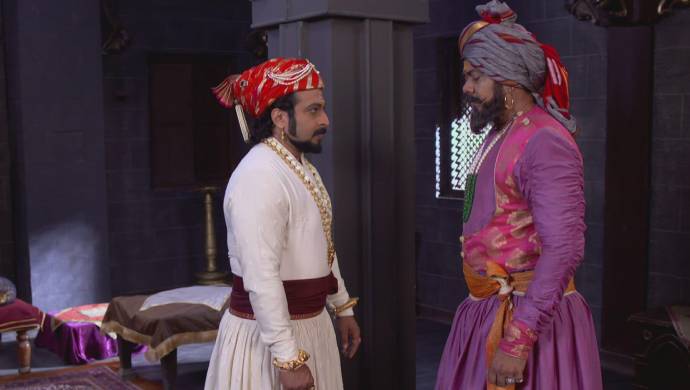 Yesubai doesn’t say anything, instead congratulates Ganoji Dadasaheb for his wife’s pregnancy. He tells Yesubai that he would be needing the money once his child is born. Before Yesubai can reply, Sakvarbai enters making Ganoji Dadsaheb and Kanhoji Rao awkward. They meet Kaviraj who asks them to wait on Raje’s orders. Ganoji Dadasaheb gets awkward but Kanhoji Rao decides to wait. The latter gives Kaviraj a bottle of attar.

Kaviraj calls an attar seller and shows him the bottle of attar which Kanhoji Rao had given him. The attar seller tells Kaviraj that this attar is only found in Aurangzeb’s palace and nowhere else. He tells Aurangzeb gifts such attars to special guests. Hearing this revelation shocks Kaviraj. He meets one of Raje’s spies who gets one more letter implicating Kanhoji of treachery.

Kanhoji Rao is annoyed with Yesubai’s behaviour for not agreeing to give their land back to them. He starts venting in front of Ganoji Dadasaheb who tries to calm him down. During this, they are summoned by Sambhaji. As they go to Sambhaji’s palace, Raje taunts Kanhoji Rao about reaching out to Aurangzeb.