In Swarajyarakshak Sambhaji, Sambhaji escapes Anaji Pant's attack. He, then, promises to avenge this by brutally punishing the culprit. 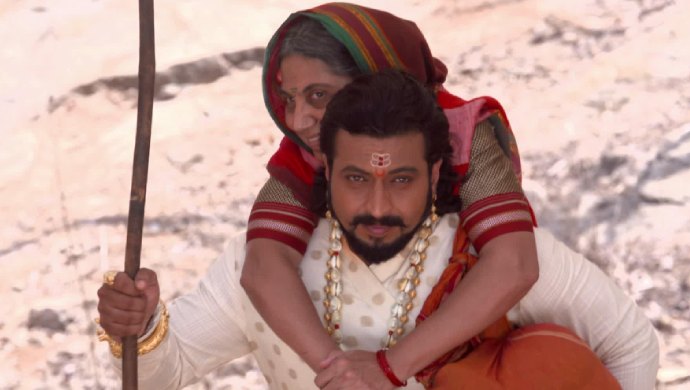 In the recent episode of Swarajyarakshak Sambhaji, a Vaidya is called after Soyrabai falls unconscious. He diagnoses that she is just stressed out and hasn’t got enough sleep. Meanwhile, Anaji Pant is waiting for Sambhaji’s death news. He has already bestowed duties upon his followers. Heroji Pant has to go to meet Akbar along with an army of 5000 people. Meanwhile, Raoji Nana has to shut the palace door tightly and not let anyone in or out. Anaji Pant has also made arrangements to take care of Hambirrao Mohite who is a loyal supporter of Sambhaji.

During this planning, Anaji Pant gets the news of Soyrabai’s sickness. He thinks she has done this purposely to hinder his plan. Meanwhile, as Sambhaji is gone horseriding, he meets an old woman in the jungle who is tired. He stops his horse and gives her water. She realises he is Sambhaji and is flattered by his modesty. He insists that she sit in the shade but the old woman wants to go to the temple to fulfil the navas. So, Sambhaji carries her on his back and takes her to her destination.

After dropping the old woman, she gives him blessings. She tells he’ll make history and his family will be blessed. During their conversation, Sambhaji gets the news that his horse has gotten injured and he fell off. This makes him anxious.

Anaji Pant goes to meet Soyrabai who is bedridden. She tells him he shouldn’t have given the letter to Akbar. He lies that he didn’t give Akbar the letter, it was the latter who insisted on taking it. Soyrabai is afraid of Sambhaji’s anger. She thinks if she is caught plotting against Sambhaji again, the matters will worsen.  Anaji Pant tries to lure her into imaging Bal Raje on the throne, while Sambhaji is dead. This scares her but Pant tells her to calm down as he is handling everything. Soyrabai is still guilty.

Meanwhile, Sambhaji promises to kill the culprit behind this attack under an elephant’s foot.

For more entertainment, check out the love story of Phulpakhru streaming free on ZEE5.

Swarajyarakshak Sambhaji 11 May 2019 Preview: Sambhaji Has Plans For Akbar