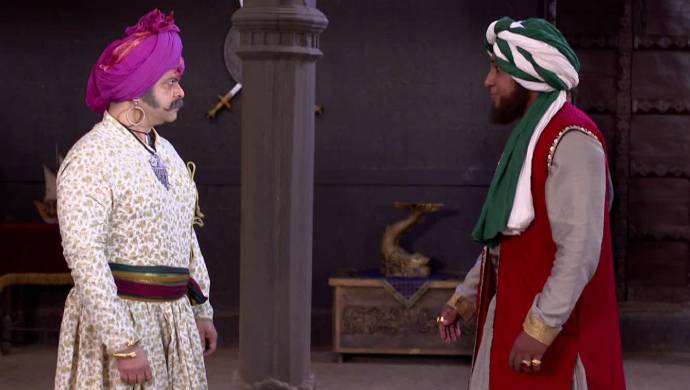 In the recent episode of Swarajyarakshak Sambhaji, Kondaji Baba catches Lavangi Bai searching his belongings. She quickly says she was looking for her surma in his bag. Then, Kondaji Baba returns her surma while suspecting her. Meanwhile, at Raigad, Bahirji Naik reports Shambhu Raje that Siddi is preparing to attack Swarajya. They blame this on Kondaji Baba’s betrayal. Nilo Pant suggests that Sambhaji should arrest Kondaji Baba’s family, only then he will return to Swarajya. But, Raje refuses this option.

Kondaji Baba spots Abdullah and the other men readying for the attack at Raigad. After inquiring, he is shocked to know that Siddi has ordered to loot villages and kidnap women in Swarajya. Abdullah invites him to rape the women, but Kondaji Baba is too horrified. Meanwhile, Bahirji Naik has gathered his spies in a meeting with Raje who instructs them to go to Janjira. This move is to help Kondaji Baba in Siddi’s realm.

Lavangi Bai comes to Kondaji Baba to help him. But, he gets irritated and humiliates her. She still doesn’t stop her advances which makes Kondaji Baba take her to Siddi. He tells Siddi that he doesn’t want his gift. Siddi is surprised and asks the trouble Lavangi Bai has caused him. Kondaji Baba tells she has been good but she isn’t useful to him. Siddi says since Lavangi Bai is his gulam, he can choose to do whatever he deems fit. So, Kondaji Baba requests Siddi for Lavangi Bai’s freedom from forced slavery.