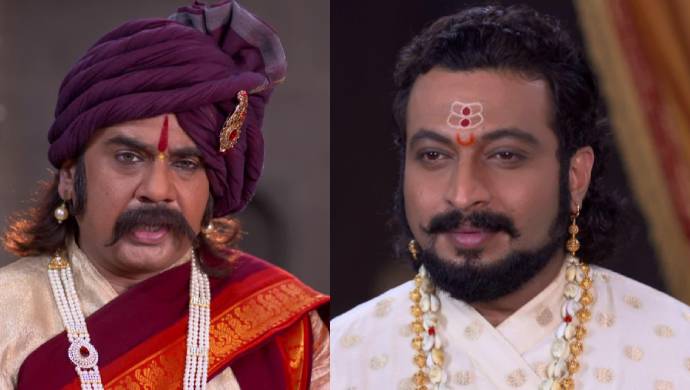 In the recent episode of Swarajyarakshak Sambhaji, Yesubai is furious at Sambhaji for breaking the promise of punishing the culprit. Raje did not punish Kaviraj and let go of him, this irks Yesubai as she thinks the subjects will start taking Sambhaji for granted. As she is discussing this, Kaviraj enters and Yesubai asks Raje to chain him. But, Raje says he would rather chain Kaviraj with his friendship. He asks  Kaviraj, the reason behind not defending himself. Kaviraj says in friendship you don’t have to explain yourself to a friend.

Kaviraj says he breathes for Sambhaji and lives for him, too. Sambhaji tells Yesubai that someone incriminated Kaviraj of the crimes that he hasn’t done and he isn’t the real criminal. This session in front of the courtiers was just to blindside the real criminal so that the real culprit could let his guard down. At night, Sambhaji wants to add new responsibility on Kaviraj’s shoulders which he happily takes. After, Kaviraj is gone Yesubai comes to inform Sambhaji that Soyrabai has stopped eating from the past two days. They both get worried and go to Soyrabai’s chambers and feed her. She says she was worried sick about Shambhu Raje hence she didn’t eat. However, Sambhaji cajoles her into eating the food.

On the other hand, Anaji Pant wonders if Sambhaji has forgiven Kaviraj just to keep the real investigation undercover. Heroji Pant supports this thought as he feels Sambhaji and Shivaji Maharaj aren’t someone who will let go of such a big incident. They decide to be more alert from this time on. Meanwhile, Anaji Pant, Heroji Pant and Raoji Anna are worried about the investigation that’s going to take place for the culprit. They secretly meet at night to discuss it.

What do you think will happen in the next week? Let us know your thoughts in the comments below.