In Swarajyarakshak Sambhaji, Kondaji Baba is getting impatient as Siddi is refusing to meet him. 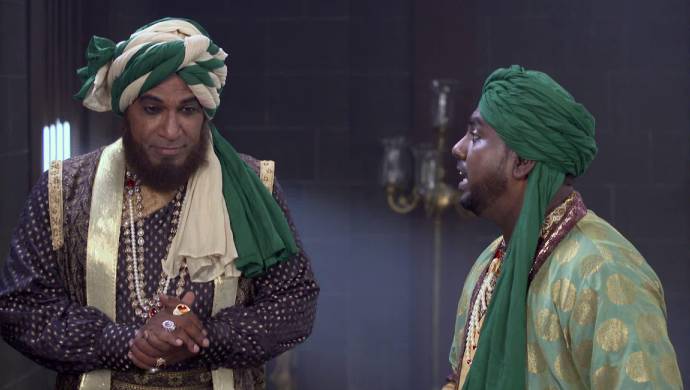 In the recent episode of Swarajyarakshak Sambhaji, Raje pretends to be upset with Khandoji Baba’s betrayal. He asks his ministers about Kondaji Baba’s whereabouts but everyone has different answers. No one is sure about his location. He tells Nilo Pant that he wants to punish Kondaji Baba for his deeds. During this session, Sambhaji gets news from a localite that Kondaji Baba has gone to Murud Janjira.

In jail, Kondaji Baba pretends to be upset with Abdullah for not introducing him to Siddi. He tries to hold Abdullah’s neck while screaming at him. A scared Abdullah tells that there will be a way out. Then, Abdullah goes to Siddi to express Kondaji Baba’s concerns. But, Siddi doesn’t care, he says that he will first test Kondaji Baba according to his time. Siddi is waiting for news about Kondaji Baba to come from Raigad.

At Raigad, the courtiers insist Sambhaji write a letter to Siddi to return Kondaji Baba’s custody back to him. But, Raje doesn’t think sending a letter would help. He decides to send a lawyer instead, but Siddi is a dangerous man. He can even kill or imprison the lawyer. So, Sambhaji decides to send a brave man from his armoury.

Sambhaji’s lawyer tries to convince Siddi to release Kondaji Baba but he doesn’t agree. Instead, Siddi arrests the lawyer, too.

Agga Bai Sasubai 2 August 2019 Preview: Abhijeet To Disguise Himself As A Vegetable Seller