Sambhaji finds a perfect Rajamudra for him. 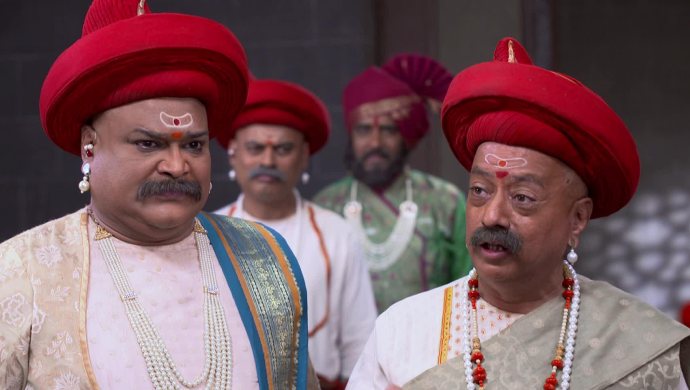 Bal Raje tells Sambhaji that he likes the word, ‘Shambhu‘ in the recent episode of Swarajyarakshak Sambhaji. After him, Yesubai and Battashi Bai announce their favourite word ‘Shivajattasya‘. Sambhaji combines both these words and says, ‘Shambhu Shivajattasya‘. Kaviraj also contributes his bit. Hearing this, Battashi Bai and Yesubai say Sambhaji’s Rajmudra is shining as bright as the sun in the sky. For people’s well-being, this Mudra will always radiate its light on the subjects.

After this session is over, Anaji Pant is furious that his testimonial wasn’t selected by Sambhaji.  The pandits, who had made this poetic testimonial, ask him for dakshina, but Pant doesn’t give them. Meanwhile, Hambirrao goes to Chitnis Pant asking if Sambhaji is going to give responsibilities for Kaviraj. He overhears this conversation and confesses that he is not interested in being the Mantri in the court, he is just looking for Sambhaji’s friendship.

Battashi Bai and Yesubai don’t want Sambhaji to pick a disloyal person as his Astha Pradhan. Battashi Bai is curious whom Sambhaji is going to pick. She tells Yesubai to ask him about it. On the other hand, Anaji Pant is also wondering about the same thing. He is hopeful to get a title in Sambhaji’s council.

Yesubai asks Sambhaji about his choices for his council of members. She expresses that Battashi Bai doesn’t want Anaji Pant as the Ashta Pradhan. But, Sambhaji feels that even though he may be poisonous, there is always some medicinal value in the poison, too. He wants to give Pant a second chance thinking he has improved. On the other hand, Anaji Pant’s spy gives this news to Pant who is happy to hear it. Then, Anaji Pant sends that spy to threaten the farmers who had not supported him when his title was taken. As the spy is on the way out, he is caught and brought to Sambhaji who gets him arrested. Sambhaji is disappointed in Pant.

For more entertainment, check out the love-story of Jodha Akbar streaming on ZEE5.

Tula Pahate Re 2 April 2019 Preview: Vikrant To Trap Sonya In His Plan?