Shanaya, Anuradha – Characters Who Underwent A Drastic Change And Joined The Side Of Good

Let's look at the characters from our favourite shows on Zee Marathi who have accepted change and switched sides for the better. 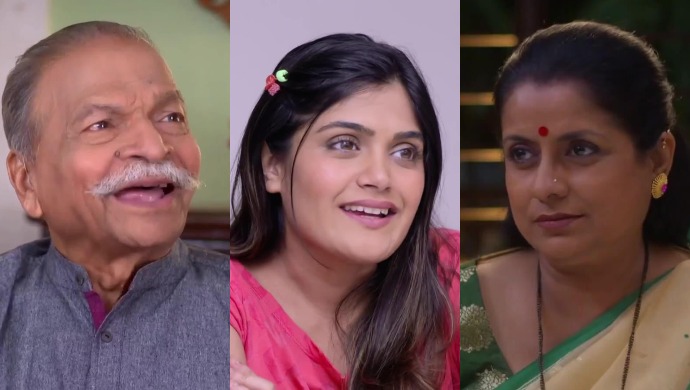 Change is inevitable in everyone’s lives including the characters from our favourite Zee Marathi daily soaps. These shows have an array of characters who display various shades of their personality. There have been times in the recent past that some characters who were leaning towards the grey, have switched sides after an eye-opening incident. That’s why we have listed down the characters on Zee Marathi who have undergone a drastic change and later joined the side of good. We begin with Mazhya Navraychi Bayko’s Shanaya.

Watch how Shanaya joins forces with Radhika after realising her fault in this episode.

During the latest episode of Mazhya Navryachi Bayko, we saw Shanaya apologising to Radhika for being a prick all her life. She realised that Gurunath took advantage of her naive nature and used her as a pawn just like his current love interest Maya. Shanaya decided to unite with Radhika so that they could together beat Gurunath. She has a dark history considering how she made her way into Radhika’s personal life by having an affair with the latter’s then-husband Gurunath. By joining forces with Radhika, Shanaya has proved that she won’t be bearing Gurunath anymore and wants to move on.

Ajoba from Agga Bai Sasubai was previously against Asawari and Abhijeet’s marriage but later came to terms with it. Soham tried to instigate Ajoba against Abhijeet so that the marriage would be broken. Following Soham’s advice, Ajoba too made his hatred evident towards Abhijeet. He began troubling them and put restrictions on Abhijeet-Asawari’s meetings. However, Abhijeet passed the test of love on several occasions which convinced Ajoba that his daughter-in-law would do great with the former. Ajoba has gladly accepted Abhijeet as Asawari’s husband and is quite close to him now.

Mrs Mukhyamantri’s Anuradha also recently underwent a drastic change in her character. Remember how she was against Samar for marrying someone who belonged to a significantly different background than their family? She has indeed come a long way as Anuradha is the opposite than what she was before. Anuradha even takes Summi’s help while strategising Samar’s political career, which suggests that she has embraced the change gracefully.

Tuzhat Jeev Rangala‘s Sunny was on the side of evil while he was married to the vamp Nandita. His wife wanted to overthrow Rana and establish herself as the head of the family. With little help from Sunny, she tried to spark trouble in Rana and Anjali’s life. After realising that Nandita is plotting against his brother, Sunny broke all the ties with her. He even put in efforts to make amends with Rana so that he could be accepted back into their family. Sunny managed to become one of the most trusted men for Rana and Anjali who is also willing to sacrifice his life for them. Isn’t it great to see him back with his beloved brother Rana?

Maza Hoshil Na Webisode: Is Sai’s Family Planning To Get Her Married?

Shubhra, Summi – Find Out Which Character Would Suit Whom If Not For Their…

Get all the live updates on Coronavirus on ZEE5 News Section.

Apurva Nemlekar, Amruta Dhongade - Actresses Who Look Nothing Like Their Reel-Life Roles

Happy Birthday Nilesh Sable! 8 Times The Actor Left Us In Splits With His Funny Mimicries